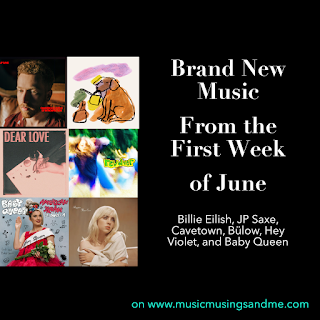 June proves to have an avalanche of new music in store based on the first week alone. The more I mulled over which of these tracks I wanted to cover this weekend, the clearer it became that I just needed to talk about all of the exciting songs that released over the course of the week. They come together to create an interesting sonic blur of nostalgia, elation, love, imagination, and numbness. There's bound to be at least one track that understands how you feel this week.

"Idea of Her" by Cavetown

Cavetown's music is perfect for studying or to softly sing you to sleep or to soundtrack a day listlessly staring up at the ceiling, watching the fan spin around. It's distinctly sonically soothing in a way that invites you to stop thinking and melt into the track. This is the standout track for me on his new EP, Man's Best Friend, because I'm fascinated by the concept of falling in love with the idea of someone. It's something I may or may not have been guilty of doing in the past, and I like the contemplative way that Cavetown comes to the realization that maybe it's not the actual person he really loves.

Favorite Lyric: "If I don't want anyone, then why do I feel so alone?" & "And I think I'm in love with the idea of her/Lie in the morning aurora/What time is it in California?"

"More of You" by JP Saxe

"Idea of Her" paints a perfect contrast to "More of You" where JP Saxe is quite sure that he's fully in love- even if that's a scary prospect. JP has a way with conversational lyricism that just feels right. He's one of the few writers whose love songs my cynical heart can get behind because he articulates his thoughts so well I innately understand what love feels like to him and why he feels so strongly. They're sweet without being sugary or cheesy, and they have a depth that does read like genuine love. I'm very excited to see where JP will go with his album at the end of June, aptly titled Dangerous Levels of Introspection, and I can't wait to see him on tour in October.

Favorite Lyric: "You make me nervous, but I want to stay in it"

Sometimes love comes in the form of admiration. Admiration for someone who doesn't get walked over, who can be a complete hurricane, who is utterly life changing. This upbeat dance tracks continues Bülow's signature blend of casually poetic lyrics with an EDM leaning production sensibility seen on her popular tracks like "You & Jennifer". The rhythm in her words makes the song stick in your head like glue. This is the perfect party song with a story, and I'm glad to see that Bülow is putting out music again.

Favorite Lyric: The entire first verse & "She'll break thorough your armer, don't try to stop her/Never seen one like her, I wanna be like her"

This one is technically breaking the rule about songs that came out this week, but I wanted to catch up on a song that I didn't get to last week but still wound up loving. I find Hey Violet to be a hit or miss band for me since I discovered them last March at an Olivia O'Brien concert. Sometimes their songs just veer off in a direction I don't totally connect with, but "Dear Love" is a proper break-up bop with a serotonin filled burst in the chorus as they lament the reality of a break-up, the bad feelings, and the betrayal that your ex was not, in fact, who you thought they were. The song fit well with the theme of casting people as characters in your head and having that illusion shatter.

Favorite Lyric: "I do drugs to numb, you drink to forget/And we get along 'til it turns to regret"

"Lost Cause" by Billie Eilish

Speaking of reflecting on less than ideal relationships, Billie put out a slinky track about realizing that your ex is actually pathetic, and he's a situation you're never going to fix. While I have to admit that I'm not the biggest fan of Billie's new sound and influences, I truly appreciate the number of biting lines she managed to casually toss into 3.5 minutes. I feel like, at least lyrically, this track is also noticeably more Finneas-feeling than many of her previous records.

Favorite Lyrics: "Thought you had your shit together, but damn I was wrong/You ain't nothing but a lost cause"

Of course, this playlist has to end on a bubbly, bright moment that also happens to tie everything together. On this track, Baby Queen manages to expertly diss the lie of the American Dream while also penning a butterfly filled love song about falling in love with the idea of a person who's just out of reach. So many of Baby Queen's songs are about an extremely interior world, even when they talk about love, and I really enjoy just how blatantly raw and honest she always is in her writing and delivery. I reacted to the track live on my YouTube channel for more detailed thoughts on the song. I think "American Dream" is just the perfect high note to start your weekend on.

Favorite Lyrics: "And I'm nothing if not persistent/So I'll think you into existence" & "Like an American Dream, you're only in my head/And totally out of reach, but I can still pretend"

More on These Artists:

Music You Missed In May

I Might Have Found My Song of the Summer: Dover Beach by Baby Queen