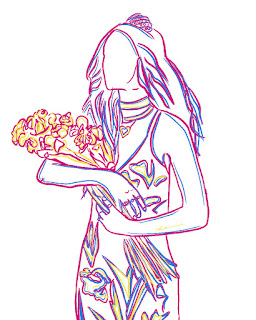 Olivia Rodrigo took us all to prom on Tuesday night with her Sour Prom Concert special live-streaming on YouTube. At 8:00pm PST, Olivia went live to answer a handful of questions from fans from the Prom drive-in location she invited fans to watch the premier from. That lasted about 10 minutes before fans at home were sent to a countdown page that lasted for 10 minutes and then unfortunately reset for another 10 minutes. Granted, the event was always set to start at 8:30pm PST, but it was a bit awkward to have to run through two different countdown clocks.

Once the actual film began, it was easy to see that fans were in for a high production treat. Olivia walks out of a house and to a white stretch limo in a satin, short, blue gown that serves as her main costume for the whole night. In the limo, she's joined by a guitar player who strums the opening notes to "happier". Olivia picks up to conveniently placed mic and starts singing a really lovely, stripped down version of "happier". Then, the limo driver turns on the radio and "deja vu" starts playing. She begins to sing a mash up of "deja vu", at times singing in a sort of a round with her own voice from the radio. I'm not the biggest fan of "happier" on the studio recording, but I absolutely loved the version. The number was also visually interesting as Olivia moved around the back seat of the car and the back windows began to show a cotton candy colored hurricane of sorts. This opening number was the highlight of the whole film for me.

After that song, Olivia gets out of the car at the prom and proceeds to walk in. She gets a few hugs as part of a blink and you'll miss it cameo by famous friends including Conan Gray and Iris Apatow. Once inside the prom, she launches into the first majorly choreographed number as she sings "brutal". And by choreographed, I mean a large number of dancers doing contemporary dance around Olivia. These dancers were not my favorite, and I feel like they detracted from large number of the performances. They felt overproduced and took away from the beautiful job Olivia did emoting throughout her performances.

The scene changes at the end of the song, and everyone begins to slow dance as Olivia hums "traitor". She makes this song feel even more heart wrenching than the studio version, but the revolving door of dancers awkwardly trying to slow dance with her while Olivia held a mic in one hand made it hard to concentrate on the really raw, emotional nature of the song. I wish the producers had left her to perform the song alone on stage as the dancers moved beneath her to further highlight the agony of the song.

Luckily, "jealousy, jealousy" proved to be a higher point as far as the production went. Olivia stood above the crowd on a spinning table as everyone partied to her song about insecurity and jealousy below. I love how this allowed the camera to fully stay focused on her face and her individual performance, even if the spinning did get a bit dizzying at times. By the end, the crowd caught up to her and they grabbed at her legs and dress hungrily like her jealousy had started to consume her.

After that, she breaks away through the crowd and wanders through a beautiful dark room with photos strung up all around. The sets and production value in this short is truly not to be missed as they went all out to create distinct performance spaces. At the back of the room, a stool and her acoustic guitar waits for her to take a quiet moment. She played "enough for you" solo, and it's another highlight of the night. The lights changed behind her in a soothing manner to compliment the song, and it gave us a second to really focus on Olivia's performance.

Then she drifts down the streamer filled hallway as "favorite crime" plays quietly in the background. She even ventures back into the strange pastel, spilled paint world that we saw at the beginning of the show for a moment. Finally, she escapes the school entirely and "drivers license" begins to play. You can tell this is the song she's had the most practice performing because it's both the strongest vocally and the emotive moments were all incredibly solid. This clearly was the climax of the entire night.

For the outdoor portion, Olivia slipped on an oversized black blazer with glittery silver piping. I wonder if this was made to look like she was wearing her date's blazer on the way home. After finishing "drivers license" at the dimly lit piano, the marching band strikes up a tune, and they barrel straight into "good 4 u". This number is the closer, and they pull out all the stops. There's a complete marching band, fans in the stands, a whole cheer squad to perform stunts behind her, and fireworks at the end. While this wasn't the strongest number, it definitely offered plenty to look at before all of her friends came back out for hugs and a final bow. They all walked arm and arm out into the night, presumably headed to the best part of prom- the after party.

I am surprised that Olivia didn't play all of her songs from the album considering there are only 11 of them. "deja vu" and "favorite crime" were reduced to background music and "hope ur okay" rolled with the end credits. I particularly love "deja vu" and "favorite crime" so I wish they would've had their moments, and I'm surprised they wanted to run the event so short. Regardless, this was an event where, as with everything Olivia does, a lot of effort, care, and work was clearly put in.

This was a great sampler of Olivia's live performance skills, which thus far have only been showcased on late night and award shows. I think this short film functions as more of a trailer for her tour that is presumably coming up than a whole concert experience itself, which makes sense considering the event was free. It definitely proved that Olivia can bring her acting skills to music as well, and I'm sure it's gotten her fans extremely excited for tour. I haven't seen people online so incredibly excited in a while. While I still wanted a little more from the night, I'm starting to realize that might have been the intention behind tonight's special.

Image Credit: My drawing of prom queen Olivia Rodrigo (you can see more of my art @movieinmyhead)