Red (Taylor's Version) Is Making Me Wish It Was Fall 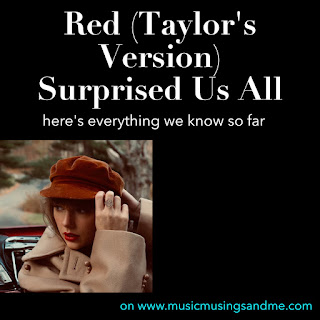 As always, Taylor Swift shows up when you least expect it with information you anticipated even less. I should know by now after the surprise album of July of 2020, the even more surprise album of December 2020, and the Fearless rerecording materializing out of thin air. But this time was extra hilarious because #1989TaylorsVersion had been trending for days and was even trending at the time of Red's announcement. Yesterday, a frustrated Tumblr post went viral from a fan upset by the weeks passing with no news about the re-recordings. She thought Taylor owed us more transparency, which is a bit of a stretch. But just as everyone started falling apart, of course, Taylor came through.

I have to defend all the Swifties (myself included) who thought 1989 was next up. The only hints towards Red was her Red era hair at the Brits and filter on that photo reminiscent of the Red cover art. We thought that maybe Red could be coming with 1989 (and I'll talk more later about why that's a possibility), but no one saw the Red announcement in the middle of June coming. Looking back, the "Invisible String" gallery on Spotify includes the outfit from the Red cover, and it's 22 weeks from the planned release date (November 19th), but how were we supposed to know? Also, she just dropped a summer merch collection that screams 1989. Was it a red herring, or is there more before November?

But back to what we actually know. This morning, Taylor posted the updated Red cover art featuring her in a coat and newsboy cap (and a ring in the style of the one she gifted Olivia Rodrigo that she wore in the red era, this time with Red inscribed into it) that fully encompasses the fall vibes the album has come to take on. This cover has a darker, more ominous feeling than Taylor's wide brimmed had and bold red lip look from the original.

Like with all of her releases, she published a couple paragraphs introducing the era and announcing that the album will be out November 19th, four months away and 22 weeks out (I'm feeling 22!!!). She also reflected back on what Red means to her. She opens with, "I've always said the world is a different place for the heartbroken." She continues to talk about how Red is all about heartbreak and the cyclone of emotions that come with being entrenched in that. "It was all over the place, a fractured mosaic of feelings that somehow all fit together in the end. Happy, free, confused, lonely, devastated, euphoric, wild, and tortured by memories past," she adds. She also goes into how Red was the first time she took a step into experimenting with different sounds and collaborators. 1989 gets all the credit for Taylor's pop revolution, but it couldn't have been such a massive moment without Red feeling out the contours of Taylor Swift as a pop artist. She goes on to say that performing the songs from Red around the world with people who understood what she was going through helped to heal her. "Sometimes you need to talk it over (over and over and over) for it to ever really be... over."

She concludes the note by sharing that there will be 30 whole tracks- the whole story of everything meant to go on Red. Then, at the end, she throws a wink to one of the fandom's longest running wishes, "And hey, one of them is even ten minutes long". This is a nod to "All Too Well", which we all know had various, rambling iterations before it became one of the fandom's most beloved songs. I think, if anything, the yearning for ten whole minutes of a single song, is the loudest testament to Taylor Swift's spot on the throne atop pop music. There is almost no one else on earth who needs to release a song that's over four minutes, but I'm ready to soak up every single extra lyric of the masterpiece that is "All Too Well".

So, let's unpack all of that. We don't have it confirmed that the two features will be reproduced (though it's extremely likely that they will) because of the lack of track list at the moment. We also don't know how many of these extra songs will be never before heard vault tracks. Consulting the Deluxe version, we know that there are 19 tracks. 16 standard album tracks and 3 bonus tracks. There's also two demos which can't really be reproduced and an acoustic version of "State of Grace", which may or may not be included. Also, in the 30, she might put out 2 versions of "All Too Well", the standard length and the 10 minutes as two separate tracks. So that leaves a possible 19, 20, or 21 tracks accounted for already.

That would leave potential space for 9-11 vault tracks. But there's a catch. She just said there'd be 30 total tracks, not specifying how many new ones there will be. Instead she emphasized it being the "complete story". If you think back on the last couple of years, there are a couple country songs that have been released by other artists that were written by Taylor (and some explicitly said to have been cut from Red). Fans have wanted Taylor's version of "Better Man" and "Babe", which Little Big Town and Sugarland perform. I think those two songs will be on the album. Taylor can perform them because she was the original writer and she has the performance rights because of that. Also, beyond that, she's friends with Little Big Town, and she was even in the "Babe" music video with Sugarland, so I'm sure they would support her in including them. So that means we'll likely end up with 6 or 7 new, unheard songs. It's ridiculous how much new music we're getting from Taylor even in the process of revisiting these old eras. Red was my stan album before Reputation, so I'm extra excited for these because I know they'll sonically be my vibe far more than Fearless (as much as I love those songs).

The other information we got from Taylor's website is that there is an explicit version of Red and a non explicit version. The original album does not have any explicit tracks, and I have to wonder if that label comes from some of the unreleased songs or if she's inserting the explicit in "All Too Well" Big Machine had her remove. On the merch site, you can only preorder the digital download for $14.99, which is surprising given that Fearless released with a full slew of physical music including CDs, cassettes, and vinyl. I'm not sure if this is due to the manufacturing issues plaguing basically every industry, the lack of track list, or some other element of surprise considering Taylor is infamous for her physical music sales.

There's much to still be unveiled about Red (Taylor's Version), and there's plenty of time before November for all the details to begin to unfold. It seems like these re-recordings are being bestowed with traditional album roll outs, which will be a foreign concept to new Swifties from the Folklore/Evermore era.

And here's one last conspiracy theory to mull over and haunt you in your sleep. I think 1989 Taylor's Version is still coming this summer. I think, like the billion "Willow" remixes, this announcement is a diversion. 1989 will be a spontaneous drop in the next couple months in the long gap between now and Red. There have been too many hints at 1989 for it to not come until next year, and 1989 is summer. She seems to be very conscious of the "season" of each of her albums, so I don't think she'll pass this summer up. Also, the goal of the re-recordings is to devalue the original masters and have people stream hers instead, so it would be most advantageous to release them as quickly as possible. I could totally be wrong, but that's my instinct right now. She loves to keep us on our toes.