Zooming with Delacey and Loving Her New Single "Drama Queen" 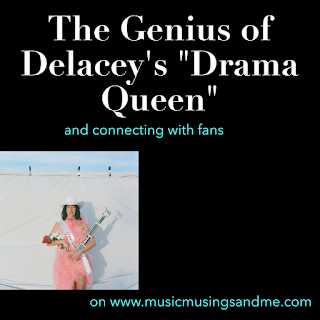 While in many ways the pandemic has put a wall between artists and their fans, it's also opened up so many unique opportunities to connect. Delacey proved that Friday night by inviting about 16 fans to a casual Zoom party to celebrate to release of her new song "Drama Queen". I started following Delacey a couple months ago when I discovered and fell in love with her 2020 album Black Coffee. When she put a call on her story to DM her the codeword for a chance to receive a Zoom invite, I sent in the magic word and got a DM back with a link a few hours before.

I've been to a couple Zoom artist events- some hosted by radio stations and others by the artists themselves- but I'd never experienced one like this. When we got on, she immediately asked us all to unmute and share where we were from. We all stayed unmuted like we were really in a room tougher, which it completely the opposite of most Zoom experiences. Delacey sat in her living room with her manager off camera while we shared how we discovered her music and she opened the floor for us to ask questions about her music, songwriting, and her career both as a writer and an artist. She was incredibly candid and kind. It genuinely felt like she was speaking to each of us as she offered advice and even played early demos off her phone. She shared tidbits about the forthcoming album that "Drama Queen" is preceding and painted the picture of herself writing alone in a cabin in the woods in rural New York.

The Zoom night was honestly an incredible experience. I've never witnessed an artist be so open with her fans. It truly felt like a get together with friends in a way that I didn't think was possible in a room full of strangers, and if anything, it gave me more of the feeling I miss from concerts than the concert livestreams I've been to in the last year, even without a live music performance involved.

Now, to talk about the reason I got to go to the Zoom at all, there's "Drama Queen". Delacey's music is always genuine and ironically hilarious, and her voice has a fascinating texture to it. All of those traits from her debut album are still present as she introduces a few country notes with some harmonica and a touch of twang. It almost has a Kacey Musgraves quality in its soothing, relaxing acoustic guitar swing. I love the space in the soundscape of the song.

The structure is also fascinating. There are two verses separated by prechoruses that have different lyrics, a chorus, a third verse, a third prechorus, a chorus, a bridge, and an outro. I appreciate songs that are heavier on the lyrical content, so that structure suits me perfectly. I also love how the song is about so many different things at once. She's likely singing to a romantic partner, but it's mostly a meditation on herself as she dissects being a drama queen and each verse tackles a part of herself that she'd maybe like to change (but is still able to wink at in the process).

Delacey is extremely gifted when it comes to lyrics. Having co-written on other songs for other artists like "Without Me" by Halsey and "Ruin My Life" by Zara Larsson, I love how personal and witty her lyrics for herself are. Her voice is incredibly distinctive within her own project. She opens the first verse with "I been on my same old bullshit/Make everyone but me the culprit" which is definitely a little too relatable. In the second verse, she reminisces on her legacy with an amused nod, "I know when I leave this Earth/The world will probably still turn/But damn it, you'll miss the drama". In the chorus she pokes fun at herself and her drama queen status while also saying that it would be easier to leave her, but staying would say a lot. In the bridge I love and deeply relate to the line "I probably said something morbid/Dark humor, yeah, I'm all for it".

It turns out to be a very sweet song about finding someone who's happy to accept you as the drama queen you are.

Make sure you check out "Drama Queen" and Delacey's latest album Black Coffee (my favorite tracks are "Subway Song", "Emily", and "No One's Ever Gonna Love U").

"Our Song" Niall and Anne-Marie Review