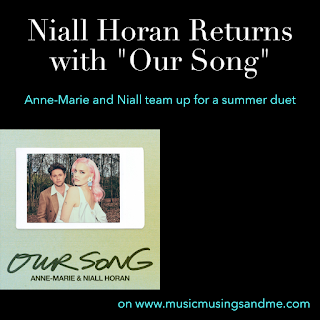 Last night, Niall Horan returns to the pop music world with a brand new single over a year after his sophomore album, Heartbreak Weather, released the week the COVID shutdown began. Niall definitely made the best of a bad deal, finishing a week on James Corden's Late Late Show to promote the album and turning a cancelled Today show performance slot into weeks of Instagram lives playing the album in his living room and explaining it track by track.

"Our Song" (a confusing title for any Taylor Swift fan) is a duet with rising British pop singer Anne-Marie. It's not completely clear whose song this is primarily as it's equally credited to Niall and Anne-Marie without using the word feature. The video, however, did premier on Anne-Marie's channel. This upbeat break-up song was co-written by Niall and Anne-Marie along with writers Tom Barnes, Plested, Pete Kelleher, and Ben Kohn.

The track has been a long time coming. Niall posted a still from the music video with the caption "it's happening" back on April 8th, and they've both been teasing the song all through March. Anne-Marie's bubblegum pink hair has become truly iconic because, from the first photo of the back of her head, fans knew right away who Niall was planning a collab with.

Sonically, they fuse their different styles quite well. Anne-Marie tends to lean closer to pure pop and electronic beats made for summer festivals while Niall's most comfortable with live instruments and folk and rock inspired musical roots. They've managed to blend these different styles without too much dissonance, and I like that Anne-Marie brings a real lift and sunniness to this sad track. I do have to admit that it's not sonically very original. It definitely gives me the sense that I've heard it before and maybe that it's even a little dated- more 2010s than 2020s- but I still think it'll make a great summer soundtrack song. I could also see it scoring a movie montage with the way the chorus boldly opens up.

I also like that the song lyrically plays with your expectations. This isn't an aggressively happy sad song like some of my all time favorites, and it's almost confusing because I'm not even sure if the song is all that sad. Niall and Anne-Marie both sing about being reminded of exes and becoming nostalgic when they find little reminders of them (namely, when their song plays on the radio). I like that the tone of the music signals that this longing is a passing thought, not a dangerous loneliness spiral. This song is almost like an endearing shrug to a time in the past. I honestly don't get the impression that they're singing about each other or two each other in the universe of the song. It's presented more like one of those TV scenes where two characters are facing the exact same thing, even though they're apart.

The lyrics are as delightfully neutral as the production. I think that they're interesting and tell a story. Nothing about them either wows or disappoints me, which makes it a great song to fill out a playlist. In the verses, Anne-Marie and Niall mirror each other talking about how they're better off alone and that they're starting to move on. Niall is "in his own bedsheets" and Anne-Marie is back "in my own white-tee", which are the only variations in the verse between their parts.

The chorus is so pleasantly casual as they get caught up on a song that used to be so important to them and then realize that they can let it go after all. "Just when I think you're gone, hear our song on the radio/Just like that, takes me back to the places we used to know." I love the nostalgia in that. In the second part of the chorus they sing, "When I hear it, I can't stop smiling/I remember you're gone, it's just a song on the radio/That we used to know". There isn't much of a bridge and the chorus laps many times over, so the chorus is really the center of the story.

In the music video, Anne-Marie and Niall go on a heist fit to be a music video for Olivia Rodrigo's new track, "Favorite Crime", or Taylor's iconic songs "Getaway Car" or "Cruel Summer" based on the pretty pastel colors. They use vintage cars and outfits to set the scene but get cornered by modern police cars in the end looking to reclaim their bags of jewels and money. It's not an original video concept by any stretch of the imagination, but I think it made for a good COVID safe video with a color palette that fit the vibe of the song. It's honestly one of Niall's better videos as they've never seemed to be a particular interest to him.

"Our Song" has definitely earned its place on my summer playlist. While I don't think this will ever end up on either of their albums, it's a fun collaboration to tide fans over until their next big projects. Niall has been teasing that he's been writing and working on new music all throughout quarantine, so hopefully he has some bigger projects in the works. It's also yet to be seen how Niall will choose to go forward with touring after cancelling the Heartbreak Weather tours. Anne-Marie is set to release her second album Therapy in July.