Music You Missed in May (Cavetown, Girl In Red, Rebecca Black, and Lisa Heller) 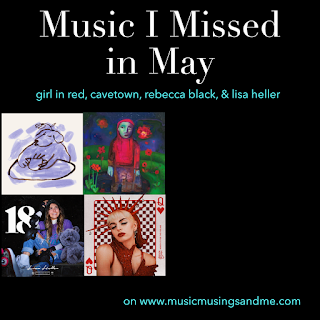 girl in red's album if I could make it go quiet

This album took me a second to get into. I was really impressed with "serotonin" when it dropped in March, and I wrote about it for the blog, but it took me longer to work out my feelings on the whole project. It alternates from the undeniable loudness in "serotonin" and the softer sounds that cover earlier tracks like "midnight love". I have mixed feelings about some of the more aggressive sounding songs, but I've really fallen in love with the vulnerability of "Apartment 402" and ".". I've been listening to these two tracks all of May, and I have yet to get sick of them. They're sonically more my speed, and I think her quieter, more floaty vocals emphasize her immense amount of skill as a writer.

Cavetown's new single "Ur Gonna Wish U Believed Me"

This was a song that took me by surprise. I've enjoyed Cavetown's in the music in the past and some of his old videos, but I've never managed to get very invested in his music after discovering him through Conan Gray. Because a lot of my friends who follow Conan also like Cavetown, I found out he was releasing a new song, and I decided to check it out. This track quietly slipped its way onto my playlist purely for the vibes. Despite reading the lyrics multiple times, I still don't feel like I quite fully have a grasp on what the song is about, but I love the soft, soothing quality of the acoustic guitar mixing with his voice. It's just generally pleasant. The song has convinced me to listen to Cavetown's new EP man's best friend when it comes out June 4th.

Rebecca Black released "Worth It for the Feeling"

I checked out Rebecca Black's lead single "Girlfriend" a few months ago, intrigued at what the official launch of her serious music career would look like. She seems to be a promising rising pop star who could fill the shoes Lady Gaga is starting to move on from. While I wasn't a huge fan of "Girlfriend" as a song, I was rightfully excited about the potential there. "Worth It for the Feeling" has an infectious chorus, a smooth, easy feeling to it that makes it easily one of my favorite pop releases of the month. The more I've learned about Rebecca Black, the more I like both her as a person and as a musician. She's also releasing a new project in June (the 16th) called Rebecca Black Was Here that I'm super excited for. The midweek release choice definitely sets it apart.

Lisa Heller gets nostalgic on "18"

I spoke to Lisa Heller last month about her single "Red Flags" and forthcoming EP, and this month, she released a second single, "18". I'm such a sucker for songs about growing up and childhood nostalgia (see "Little League", "Ribs", I'm going to go cry now...), so I was already primed to like this release.
May Releases I've Talked About...
Full SOUR Reaction on YouTube
Delacey's "Drama Queen" + Meeting Her!
"Our Song" by Niall Horan and Ann-Marie
Live Reaction to Conan Gray's "Astronomy"
Reacting to Gracie Abrams "Mess It Up"
Artists of the week cavetown girl in red Lisa Heller my playlist Rebecca Black Singles Song Reviews Weekly Update What's In my Earbuds