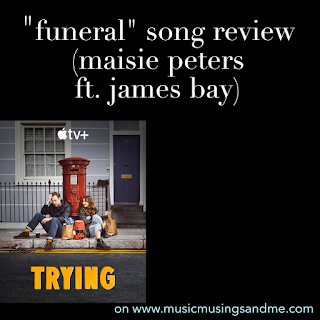 Maisie Peters certainly had a surprise for fans this morning. She's been teasing the release of her debut album, called MP1 by both fans and Maisie, but she had something entirely different up her sleeve for today. On Instagram, she announced that, in addition to working on her debut, she's been working on a second project nearly as big as an album. Last October, she started writing the soundtrack for the Apple TV+ show Trying. The show and the full soundtrack, complete with nine songs, drops May 21st, but she released the first single, "Funeral" with James Bay today.

In the Instagram post announcing the soundtrack, Maisie wrote, "I can’t believe i kept it a secret from u all for all this time, and i can’t believe i managed to make a whole soundtrack at the same time as making mp1. i essentially made two albums in 6 months and the fact that they are both (in my silly little opinion) so perfect, is just idk so cool and i’m just so happy i get to give u both." In a second post, she discussed how James Bay was the only person she ever wanted to feature on "Funeral". "i’ve been a fan of his since i was 15 and went to see him play brighton dome and i didn’t know if he’d agree but i wrote him a very earnest three paragraph email where i basically pitched him the song with bullet points and everything and luckily for me he agreed," she added. I love when artists reveal how songs came to life, and I'm always more endeared to tracks when I know the artist truly believes in the project.

Maisie is not a stranger to collaborations given that one of her most recent releases was with JP Saxe, but I feel like this is one of her more successful duet attempts. The lyrics are extremely vivid and moving. They drew me in right from the very beginning.

I like the understated, acoustic feeling to the song. It puts an emphasis on their voices and the lyrics. The instrumentals rise appropriately with the increasing intensity of the song, but it never fights with their voices. I really love the percussion added in the chorus. While I was surprised, I do like that James sets the tone for the song and takes the opening verse. He sets up the story really well. The only thing musically that I'm unsure about is the melody of the verses. The chorus flows so effortlessly and feels epic without being melodramatic. The verse melody just feels like it doesn't quite find its footing. The two verses are the smallest portions of the song, so it doesn't really make that much of a difference, but it did make me a little uncertain at first.

The lyrics are wonderful because they clearly speak directly to the plot of the show, yet it manages to tie into the set of themes that Maisie has been exploring in the bulk of her recent tracks. She sings about being insecure and afraid to fully commit to a relationship because she's been hurt in the past like she has on songs like "Maybe Don't". But the song is also about the beauty of finding someone you click with on such a deep level that it can't be ignored. That you'll come back to life for, that you'll never stop missing.

In his verse, James sings about how the situation isn't going quite how they envisioned it, but if she trusts him again, she won't regret it. In Maisie's verse she sings about how she can't let bad past experiences and other people's mistakes prevent her from giving this relationship a chance. In a cute nod to Maisie's typical writing style, she calls herself a "serial blusher".

What I might love most about this song is that the chorus is framed because of its melodic structure, but the lyrics are actually completely different in the second repetition. The first chorus starts with the grand declaration that they want their lover rolling in their grave, calling off their own funeral to come back for the other person because that's how grand their love is. My favorite line in the first chorus comes from its second half when they sing, "I want you to know the past is the past/That everything changed when I heard you laugh". The storytelling throughout runs incredibly strong.

In the second chorus, they sing about wanting each other despite his mistakes and her insecurities. They vow to live each day to the fullest and with no regrets. Maisie also talks about how she would be a jealous ghost and scratch out all the names of the girls he would love after her, which is a cute nod. But my favorite set of lines goes, "To live every day like like the plane might crash/To chase every satellite and star/I pin all my hopes to your handlebars". The handlebars line is so original and yet immediately compelling while I'm always a sucker for anything that mentions stars.

Then, we get to the bridge. In a world that's quickly abandoning my favorite part of any song, I know I can always count on Maisie. Clearly influenced by Taylor Swift, Maisie even specifically mentioned the bridge (called the middle 8 in the UK) in her Instagram post, "hope u love it like we do. especially the middle 8 i fucking love the middle 8." And in the bridge, the song reaches its dramatic peak where they realize they can put the past aside and focus on the fact that they did eventually find each other. "We both got hurt by other people/But we found each other, baby, right in time," they declare together.

Maisie has yet again done what she does best- wrote the perfect teenage love song. There's the perfect amount of detail in a story that its specific and still feels universal. It plays with themes of fait, forgiveness, and soulmates in a way that is completely inviting and as satisfying as your favorite cheesy romance. The song has succeeded in both making me excited for the Trying soundtrack and curious to check out the show.

Reacting to the It's Your Bed Babe, It's Your Funeral

"When Was It Over" Sasha Sloan x Sam Hunt Review

Conan Gray is Definitely Up to Something