I Think Conan Gray is Hinting at his Second Album 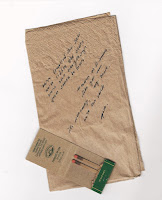 Hi, welcome to a post that I kind of feel ridiculous writing. But hear me out. I think Conan Gray is hinting at his second album through cryptic Instagram posts. And I could be wrong, but "Astronomy" was released after a series of random stories of photos from the Hubble Telescope, so just come reach with me. And if I'm spectacularly wrong, I will preemptively give you this meme from Conan himself: 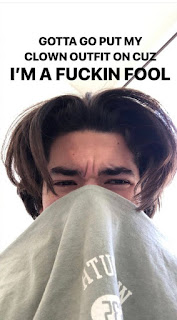 This all started four days ago on May 24th. Conan Gray posted a professionally photographed hand with lyrics from "Astronomy" on it. They aren't the correct lyrics, but they are lyrics. Conan wrote "they said distances brings fondness but guess not with us" and also captioned it "they said distance brings fondness". The correct lyric is "you" not "they". This caught everyone's attention for a couple reasons. 1) it does not fit his Instagram feed at all 2) the lyric is wrong 3) it's kind of promoting "Astronomy", but you would only know that if you already knew the song lyrics. There's nothing about streaming "Astronomy". It's just very cryptic and weird and also doesn't fit well with the vibe of the new song or video. So the fandom was thrown into a state of total confusion. No one expected Conan's social media silence in the week before to end in a hand.

And then we fell back into another laps of silence and we all started to wonder if it was just really questionable "Astronomy" promotion. Yesterday, Conan released an acoustic version of "Astronomy" on his channel and a new interview dropped with NME. In the last month, he's done interviews with Teen Vogue, GQ, and Seventeen without promoting any particular project. This trend continued in the NME interview, but he did talk about touring and the new album briefly. He said he wants to tour after his next album, which didn't sound extremely far away. Also, when asked to reveal the first text he sent that morning, he answered it was a reply to a text from his producer Dan Nigro complimenting an undisclosed song for the undisclosed album. But this was the first time he talked about working on music and also acknowledged a second project as existing after saying that the album was only in the very beginning stages during "Overdrive" interviews.

Which brings me to today, May 28th, when Conan posted on Instagram yet again. What appears to be a photo dump seems to be a hint at something more. Twitter (myself included) has a running theory that the selfie on the cover might be from a music video shoot (similar to how this selfie got posted from the "Overdrive" shoot before the video dropped). The third slide is most interesting, though.

It's a napkin with more "Astronomy" lyrics with a very similar aesthetic to the hand post. This one is buried in the middle of the photo dump, even though it looks more like a graphic than a photo. There's also a book of matches in the photo that says there are 20 matches, but there are only two left in the book.

Twitter immediately caught on to the fact that there were supposed to be 20 matches but all but 2 are used leaving us with the number 18. Everyone started creating theories around 18, but I think the matchbook is a clue to something else. If you count the missing places where the matches are broken off, the first match that's still there is the 7th match. The next match isn't the 8th one next to it but the 9th match. This seems very intentional because most people just start pulling matches from one side and use them in order till the end of the carton.

So what does that mean? 7/9. July 9th. A Friday. And not only a Friday, but if you notice the caption on the post is "summer" (which it's dubious to call May summer), but July 9th is most definitely summer. A Friday in summer, which would be the perfect time to drop the album. I immediately knew it was a Friday this year because July 9th happens to be my birthday.

I don't know if this is actually going to go anywhere because we have so few clues at the moment, but my Swiftie/Halsey brain jumped into action, and I felt like documenting it, so let's hope the album comes out July 9th, and I can be vindicated, not totally wrong. But the guessing is all part of the fun, right?

June 9th: I was getting scared that I was going to have to admit to being a complete clown, but maybe not yet. Exactly 1 month out from when I project Conan Gray's second album will drop, he made an interesting post to Instagram. While it seems like a relatively normal selfie, it's almost exactly like a photo he posted in January captioned "here comes the boy with the girls" on which his producer Dan Nigro commented "LP2Lewks". LP 2 being Conan's second full length album. Fans immediately caught on to the photos being similar, but I think this post is even a reference to Dan's comment and the significance of January's post. Stay tuned because I think things are about to get far more interesting.

June 13th: So just when I was about to admit defeat, we get a clip of a brand new song!!!! Can you believe that? The clip has been posted to all platforms and features a video and part of one of Conan's new songs.

The lyrics can be a bit hard to make out on the recording, so I typed them all out for you:
"That wasn’t funny but she laughed so hard she almost cried

They’re counting months they’ve been together

He’s making fun of how she act around the holidays

Based on the clip, the caption "life feels so monotone" and the storyline, I think this is going to be a song inspired by a book, which Conan had previously discussed in interviews for "Overdrive".

I don't know if I've been this excited for a song in a while. I absolutely love the lyrics we have so far, and I can't wait to hear the rest of the song (which is hopefully coming this Friday?!). Stay tuned for more updates, hopefully coming soon!

June 20: It's been a slow week, and hopefully I'll have a better update later today. In this week, there hasn't been much that gives hope about the new song or album. But around Wednesday, both of Conan's managers and his management company shared the teaser clip with the 👀 emojis, so they clearly think we should be looking out for something. Also, Conan posted on Instagram recently with a photo dump captioned with 😳. The last time he used that emoji to caption a post, "Overdrive" was announced in his next post.

June 21: It's been a week since the last update, and there is still no song. But there is twenty more seconds of teaser released to Instagram, Twitter, and TikTok. I'm honestly not sure if this is the same song or not because there were no teasers between the two, and these clips have a very different vibe to me. I believe this song that he shared in the clip will be called "People Watching", and this song absolutely blew me away. Even with just 20 seconds, it's already my new favorite song.

There's been quite a bit of debate over whether these clips are from the same song or not. Personally, while the themes are very similar, I think there's a good chance they are different songs. This would be a strange way to tease only one song, so I think he's releasing pieces of certain songs on the album every Sunday up to the release date. A new single will need to be coming soon, but these just don't feel like connected single teasers to me. They're connected by central themes and formats like an album, though. Either way,  this new music will likely be my favorite that Conan has ever released.

I'm not expecting anything to come out this Friday anymore though. I guess we'll wait and see if Conan proves me wrong.

"Astronomy": The Clues Leading Up to the Single

"Overdrive": The Clues Leading Up to the Single

Halsey is Up to Something: LXXXXP

This is a collaboration I can get behind. Gracie Abrams is an artist that is slowly, quietly cementing her place among songwriting greats and finding her place as an understated, indie pop girl after getting into the world as the daughter of director JJ Abrams. With nearly 450,000 Instagram followers and a debut EP, Minor , that is nearly so understated it becomes hard to chart its magnitude, Gracie is slowly creeping into the mainstream. Though her fanbase is on the smaller side, it's quite devoted, as I discovered when I made a video reacting to Minor  a few months ago. That reaction still gets consistent views and has some of the most heartfelt comments from fans I've ever recieved. She's already cultivating a fanbase that will take her far, and her soft, intimate bedroom pop style speaks directly to this isolated moment.  That makes her an interesting, unexpected, and nearly perfect collaborator for illustrious producer and songwriter Benny Blanco . Benny has been in t

Today's review is a bit different because I'm reviewing someone I'm not already a fan of. Usually, I stick to talking about an artist I already know inside and out, but today, I'm focusing on Girl In Red instead. She's previously toured with Conan Gray, and I have plenty of friends who like her music already, so she's been on my radar for a while. She's not a complete departure from my usual musical loop. I even had "Midnight Love" on a playlist over the summer. But I'm coming into this without a ton of context.  I saw everyone talking about "Serotonin"'s release and noticed that Finneas produced it, so I decided I would check out the first single of her debut album era. While the album isn't set to drop till April 30th, there are already a handful of songs out in anticipation of if I could make it go quiet.  I went in tentatively, but the candor in the lyrics immediately hooked me in. Girl In Red takes on the ugly, unglamor