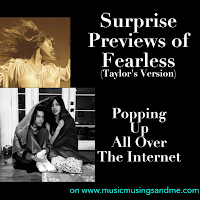 Releases are never boring when Taylor Swift is at the helm. Today has been marked by tons of surprise snippets popping up where they're least expected ahead of Fearless (Taylor's Version) coming out tonight at midnight EST.

It all started with Taylor's fifteen seconds on GMA this morning. While Swifities were disappointed to only see a flash of Taylor on the show, it was a clue as to what was going to unfold through the rest of the day. On the show, Taylor played a clip of the title track, "Fearless". She also gave fans a quick message.

Shortly after, Conan Gray took to TikTok around 5:50 AM PST to share a clip of the iconic Fearless single "You Belong With Me" with the help of fellow Swiftie, Olivia Rodrigo. They start out by reenacting the music video holding up signs to one another before having a full on hairbrush singing party for the rest of the video. I didn't realize at first that these little videos were part of a larger Easter egg scheme because Conan's fandom absolutely lit up for these videos, and "Conan" started trending on Twitter worldwide.

Then, Olivia got her own time to shine with her Reel, also featuring Conan. Olivia debuted Taylor's Version of "White Horse" and the two wound up acting out some of the most iconic lyrics as they ran through Conan's house.

If you didn't know, Conan and Olivia have been regarded as Taylor's "children" in a popular meme format for a while now. Last year, Taylor shared Conan's song "Wish You Were Sober" on her stories, and he was sent a cardigan during Folklore promo. Olivia also recently caught Taylor's attention with her song "Driver's License", and Taylor sent her a ring like the one she wore while writing Red and a 10 page handwritten letter. They've both been huge Swifties their entire lives, so it was perfect for Taylor to tap them and their fanbases to drum up excitement for the first Taylor's Version release. They even got together the other week to listen to the first Vault song "You All Over Me" when it dropped. Seeing their pure enthusiasm got me immediately excited for what else is coming today.

Taylor jumped in on the "children" meme on Twitter, reposting Conan's TikTok to remind people that the album is out at midnight and also confirming that she sent along the brand new versions of the songs for them to debut.

You ok? NO cause I sent my two kids @Olivia_Rodrigo and @conangray my new version of You Belong With Me and THEY ARE SO CUTE IT PHYSICALLY HURTS ME
((Album out at midnight!)) pic.twitter.com/yDJusP8TAs

Things get a bit more bland from here as Taylor sent people on an app hopping adventure to find even more teasers. "Fifteen" was debuted on Snapchat (for whoever is still on Snapchat?). Later, "Breathe" featuring Colbie Caillat surfaced on Tumblr. If you visit the website the chance to listen to the preview is front and center. It's only fitting that Tumblr got a debut considering that the platform was synonymous with Taylor for much of her career and was the place she engaged with her fandom most often. Then, not long after, Taylor Nation had the honor of dropping "Hey Stephen" in a random, unannounced Twitter Space, a relatively new platform that no one is totally sure about. The room was simply titled 🤫. One fan made a joke wondering if the next preview will pop up on LinkdIn, which doesn't feel far off. She's running out of surprise platform drops, but the day is still young, so it'll be interesting to see what else Taylor has up her sleeve leading up to midnight.

Taylor Swift is almost always the music industry blueprint for music of course but also for her unique marketing tact and genius, and it's fascinating to see this new, inventive take on an internet scavenger hunt to hype everyone up for an album that they've been listening to for the last 13 years (aside from the new vault songs, which we're all eagerly awaiting). Let's see where Taylor will drop a teaser next. If there's one thing you need to know about being a Swiftie, it's that your eyes almost need to be open and looking for clues.

You All Need to Listen to Baby Queen