Sasha Sloan Returns With a Duet ft. Sam Hunt: "When Was It Over" 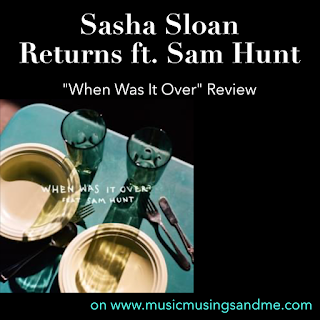 After releasing her debut album, Only Child, in October 2020 and playing her first live show for the album (virtually), Sasha Sloan is back with a new duet. It seems like collaborations are the new trendy move after a debut album, and Sasha has managed to handle that particular move more gracefully than other recent attempts. I wasn't sure what to think when I saw that alternative/indie pop/singer songwriter sad girl Sasha Sloan was going to sing a duet with football player turned country music mainstay, Sam Hunt, I was pleasantly surprised by the results.

They manage to complement each other's styles without leaning too far one way or the other. "When Was It Over" blends together the simple, acoustic, storytelling focused song structure I love from country with Sasha's honest lyrics about heartbreak that steer the song away from the common country tropes that make me cringe. It's like Speak Now/Red level country, which I can definitely appreciate.

Sasha hasn't revealed much about how this track came about or how it fits into her larger plans for her discography. My guess is that it's simply a one off. It was only promoted with a short teaser with a date the Friday before and then a quick post on release night that was captioned "out now! hope ya'll like it🙃 link in bio". Sasha has been quite open about the fact that she's working on a second album that she hopes will release not too far out into the future, so this seems like a good transitional moment.

The production mostly works to pull out their vocals and the lyrics. The bright acoustic guitar is really the only other element in the song before a smattering of banjo and drum machine come in. It almost feels a little dated and sounds like a song that I've heard before. There's also a long, almost awkward thirty second outro that doesn't help the song at all. I think that the song stands out more lyrically.

The song comes from Sasha's usual bunch of collaborators. The writers, outside of Sasha and Sam, include Emi Dragoi, Shane McAnally, and King Henry, who also produced the track and is Sasha's boyfriend.

The most standout section of the song is the first verse that Sasha takes solo. These lyrics unravel in a way that is so strongly Sasha, and they carry such a rhythm that is innate to the syllabic choices she's made. "Was it the night I didn't ask where you've been?/Was it the fight we didn't have when I came in?/Was it the first time that you saw me drunk?/Second time I said "I'm sorry"?/Third time that I didn't call/Stayed out and missed your party/That time I met your friends I was indifferent/The way you act has got me questioning". She goes through the moments where the relationship suffered small deaths. In reflection, she finds the spots that felt like red flags. I love the counting mechanism she deploys in the middle of the verse that hooks you back in.

In the chorus, they hit at the central question of the song "When was it over for you?". It ends with, "It's still not over for me", which is a refrain that Sasha carries through the entire song. It gets a little confusing as to the dynamics of who actually wanted the relationship to be over, especially when the bridge complicates things, but it feels like Sasha realized the relationship wasn't going anywhere and broke it off, even though she still did love him.

In Sam's verse, he mimics her counting style, but these lyrics just miss something about the sharp way Sasha is able to structure her phrases. He brings the country twang in his voice (an interesting paring with Sasha raspy, made for alt style) and also the nod to country lyricism in the song. Even though truly country lyrics often send me running to bad flashbacks of living in Texas, the most country-influenced line might be the one that's stuck with me the most. In the middle of verse 2, Sam hunt sings, "Second time that we drove to Texas?/Third time we ran into one of my random exes?". It's a funny question, and I do appreciate his twist on the time old rhyme of Texas and Exes.

I still find this an unlikely collaboration, but it ultimately works out better than many of the collabs I've seen that have much more evenly matched demographics. It seems like this song is simply an appreciation of being able to tell a story. It might not hit as hard as some of Sasha's other, more honest feeling songs, but it's definitely earning a spot on my playlist.

Conan Gray Is Definitely Up To Something

Baby Queen Might Have MY Song of the Summer