Olivia Rodrigo is Back to Follow Up "drivers license": "deja vu" video review 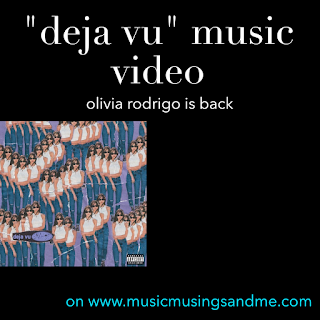 I guess I'll start this off by telling you that I love "deja vu" (more than "drivers license"), but Olivia really managed to outdo herself this time. The song also proves that she's an even better songwriter than everyone's already high estimations. But I'm not going to go too far into my thoughts on "deja vu" the song at the moment because those are coming on my YouTube channel tomorrow morning. Make sure you're subscribed if you're not already so you don't miss it!

Instead, today I'm talking about the album announcement and the music video that dropped with "deja vu" this morning. On her pre-song live, Olivia revealed that today she turned in the final version of the album to the label, and it'll be dropping sometime soon. While the album art, title, and release date are still currently top secret, we do know it's 11 tracks long and can be presaved on all platforms now. She also dropped new merch and signed CDs (which sold out in the amount of time it took to grab my credit card) if you want a memento of the song or physical copy of the upcoming album.

As Olivia mentioned in the live, the music video doesn't tell the exact story running through "deja vu". Instead, she plays on the idea of doubles, clones,  jealousy- deja vu- in a new way. The video opens with a '50s style scene with Olivia driving through Malibu in oversized sunglasses with a scarf tied around her head. The opening highway shot seems to show the same beach as the iconic "What Makes You Beautiful" music video that also pops up in Harry Styles's "Watermelon Sugar" video. It's a beach that'll immediately give flashbacks to any Directioners.

Olivia parks and walks into a garden/house area where she proceeds to watch a girl swish around in a gorgeous, green ballgown. She runs out of the room and gets back in her white Mercedes (a nod that carries over from the "Drivers License" music video) and drives home where she finds her own green ballgown. It starts to dawn on the audience that she not only admires that girl but wants to become her in every sense of the word.

In her new, green dress, she enters a massive room in a mansion with stacks and stacks of vintage TVs where she's watching clips of herself and that other girl go through a variety of settings and outfits. She manipulates the dials to make the girls in the screen run forward and backwards- pause and replay and reverse. Slowly, we start to see Olivia in the outfits and settings previously home to the other mysterious girl. This surveillance set up is reminiscent of the remixed video for Fletcher's "Bitter". They increasingly blend into each other as Olivia takes over all of her scenes. Then, around 2:55, the girl on the screen waves and that sets something off in Olivia.

The girl starts stealing parts of Olivia's life after that moment. Olivia looks on in shock as she realizes that the girl is stalking her too. From that moment forward, Olivia's entire mood changes, and she takes a sledgehammer to the TVs in front of her, wrecking her entire set up. It seems like she's trying to delete the girl out of her realm. In the one working screen, we see the girl in the Mercedes and scarf driving through the canyon, replacing Olivia, which is the part of the video that most ties back to the song where she sings about how her ex is replaying everything he did with her with the new girlfriend. We watch the girl drive away with her strawberry ice cream in a mirror to the beginning of the video.

I saw a user in the comments saying this is the "Cruel Summer" video that Swifties never got. And they're definitely not wrong. It's a pretty, pastel, perfect Malibu world jaded by hard feelings and jealousy. I like how the video played on themes of the song while totally erasing a corner of the love triangle. It was cool how in focusing on the two girls who shared the same obvious similarities, as in the song, that you could also see how they were jealous of one another and admired each other as well. It's not all bad blood.

I'm super excited to see where Olivia's album is going to go. It's been revealed that "drivers license" is track 3 and "deja vu" is track 5. There are 9 more tracks that could really sound like anything. These productions were so vastly different. But it does seem to indicate, with how connected these songs and their videos are, that the album will carry a clear narrative through line. I'm also excited about Olivia seemingly dropping music in quick succession. So often artists don't capitalize on their moment nearly enough, so it's refreshing to see Olivia is truly using the spotlight and delivering tons of quality music.