I Might Have Found My Song of the Summer: Dover Beach by Baby Queen 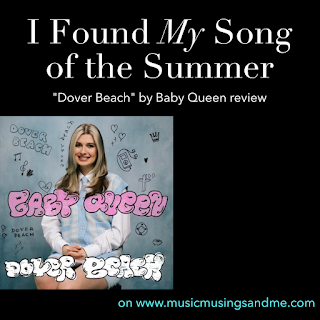 I'm a little late to this particular party, but even though I've been busy, I couldn't pass up the chance to write about "Dover Beach", Baby Queen's latest single. Making for a trio of 2021 releases that all seem to play on different superlatives or sides of Bella's personality, we now have three widely different songs tied together by her distinct point of view. "Raw Thoughts" kicked off the year with a glam feeling, breathy harmonies, and some ocean imagery that ties it into "Dover Beach". The outlier of the three, both lyrically and sonically, is the song that made me listen to Baby Queen in the first place, "These Drugs". With a harder edge both sonically and lyrically, the song introduced a sharp rawness and authenticity to the floatier offerings.

While I'll always be partial to "These Drugs", I've been happily drifting through the world of "Dover Beach" since the song dropped on the 14th. I already know that this song is going to take up a huge amount of real estate on my summer 2021 playlist. Written during a writing retreat trip to Dover in October of 2020, Baby Queen recently returned to film a music video for the track. In a series of '50s inspired outfits, she runs along the pebbly beach with her mirage of a love interest as the breezy track plays in the background.

Baby Queen delivers on what she does best in "Dover Beach". The explosion of high harmonies and breathy vocals mimics standing on the beach, sun shining on your face, wind blowing in your hair. It feels fresh and renewed and would honestly be perfect in a Tide Pod or Bounce commercial as strange as that sounds. It makes me want to put on a twirly dress and go run down the street, even though it's still forty degrees out, and I can't remember the last time I had an occasion to wear a dress.

Yet, underneath the casual layers of possibility and first love, the lyrics paint a darker picture about love lost and an inability to move forward. The song takes on an interesting structure with long first and second verses sandwiched with choruses and then a refrain, bridge, refrain, and outro.

In the first verse, she invites us into a love that refuses to leave her and how tied the memories of this specific person is to Dover Beach. She sings, "On the coastline, in the water/Your mirage is like a stalker/I should push him off the cliffside/Cause he's coloring my insides ocean blue". I love these opening lines because they expertly blend bluntness and poetry. "Your mirage is like a stalker" has particularly stuck with me because it's such a sharp contrast of imagery between a stalker and a glittering vision. Also, I appreciate the fresher take on talking about sadness as being blue, tying it into the ocean theme and twisting around the common cliche.

In the chorus, she talks about how, when she looks out of the ocean, she'll never really be alone. At one point she laments, "And I swear I'm gonna lose it if I keep playing your music". This was the first line that truly drew me into the world of the song when I took my first listen. It both reveals that as much as she wants the love interest gone, she's not doing anything to help that along, and she's well aware that's bad for her. Music is so personal. It becomes embedded in all of us. Sometimes, certain songs just become the people who listened to them around you most.

Verse 2 is quick, but the first line is another example of Baby Queen's perfect poetry: "In my self made isolation, you're my only inspiration". There's so much revealed about the situation in only a couple words. In the bridge, she mentions, "... we've got incompatible star signs".

Continuing her reign of perfectly combining upbeat production and sad lyricism, Baby Queen delivers a song that just feels like warmth and possibility. After a year inside, I want this song to soundtrack my cotton candy, music video montage of a summer. It's definitely a main character song.

You Need to Listen to Baby Queen Now

An Interview with Lisa Heller