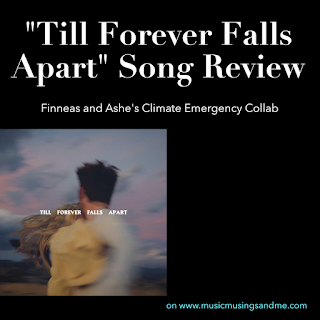 Ashe has been teasing a new collaboration for a couple weeks now. From the 5 clues she gave from making homeschooling cool again to recently learning to surf made it pretty obvious that it was Finneas behind the collaboration. Ashe and Finneas have been friends for a while, and Finneas even wrote and produced on Ashe's breakthrough hit "Moral of the Story", which later got turned into a duet with Niall Horan. To continue on Ashe's duet train, we now have this new song with Finneas called "Till Forever Falls Apart" which dropped at 9:30 am PST this morning along with a new music video.

Luckily, Finneas and Ashe's styles already meld well. They both play in the folk-inspired, acoustic-adjacent musical sandbox, so it felt like a natural combination. They also prize lyrics and storytelling which makes them a good match.

Getting into the song, even though Finneas isn't the primary artist, his fingerprints are all over this song. The storyline revolves around the end of the world, likely due to climate change. Finneas's latest music has revolved around current issues from COVID in "What They'll Say About Us" to the downfall of American culture in "Can't Wait to Be Dead" to the president's inability to function in "Where The Poison Is". Billie's music also frequently touches on topics like climate change, though less overtly than in Finneas's solo work or "Till Forever Falls Apart".

I love the way stories can fully take shape as a conversation in duets, and this song is so bursting with love even in darker times. The general message is that everything is okay if they're in it together. We're all living in a world that feels even more unstable than usual, and it's probably not getting better any time soon. Maybe it's good to have a love song that centers that doubt. While the song reads romantic to me, in an Instagram post about the song, Finneas painted It as a friendship song, "This song to me, is a love letter to friendship and I think songs like this are important. Friendship is important". I've been on a soapbox about platonic love songs for a long time, so I'm glad that Finneas put that interpretation out there.

The lyrics are thoughtful and touch on real world issues without becoming cheesy or overbearing. It has a pretty, gauzy piano ballad feeling that gives it a sweeping, romantic feeling that you can get swept up in even without listening to the lyrics. The chorus gets elevated with some well placed percussion that sounds like splashing water. It appropriately raises the stakes without overwhelming the song. The song was a production collaboration between Finneas and Big Taste and the song was written with the two producers and Ashe.

Getting into the lyrics, because Ashe is the lead artist, she opens the song. "Out on our own/Dreaming in a world that we both know/Is out of our control/But if shit hits the fan, we're not alone". This opening verse definitely drew me in. I'm definitely a dreamer and a pessimist at the same time, so that spoke to me. Adding in "shit hits the fan" is more colloquial than the most poetic, flowing verse, but it feels very Ashe.

She whispers into the prechorus reaffirming their commitment to each other before bursting into the chorus. "If the tide takes California/I'm so glad I got to hold ya/And if the sky falls from Heaven above/Oh, I know we had the best time falling in love". The chorus is structured in two sections around two California related natural disasters. There's a real possibility that California could one day become part of the ocean, but instead of dwelling on that, she's happy for the time they did have. It continues, "We've been livin' on the fault line/And for a while you were all mine/I've spent a lifetime givin' you my heart/I swear I'll be yours till forever falls apart". It's always cheesy (and probably untrue) to say you'll love someone forever, but adding that qualifier on the end makes it an easier love song to believe. We don't know how long we'll have to love each other. And while "falls apart" could refer to the literal end of the planet due to the climate emergency or death, it could also just simply mean until they're no longer right for each other. It's a grand declaration that still feels honest, which is hard to pull off.

Finneas comes in with a more directly morbid verse, truly imagining the end and setting himself there in a way that Ashe has refused to commit to with her "if"s. "So this is it, that's how it ends/I guess there's nothing more romantic than dying with your friends/And I'm not sorry for myself/I wouldn't want to spend a minute loving anybody else". His verse keeps building on the idea of no regrets, even when he is faced with that bleak reality. The last line in particular is striking because it's an important reminder that we need to be living in a way where we don't regret what happened. We can be happy for what it was.

Finneas joins Ashe on an emotional lap of the chorus. The bridge is hardly a bridge and more an alternate prechorus as they sing, "We never had it from the start/Till death do us part". Again, there is love in a doomed situation. The final lap of the chorus is most emotional as their voices layer together and Ashe lets out a painful singing scream. It's nearly a tornado of voices that lap each other. I love how the production leaves space for their voices to guide the way through the song. The instruments never get brighter.

The music video isn't my favorite. Sometimes music videos are imperative, but I don't believe it was here. They dance together in an empty field surrounded by mountains. It's a partner contemporary dance, reminiscent of many of Finneas's past videos. I don't think either of them are really dancers at heart, and it feels slightly awkward as they navigate it. A more literal, acted video in the vein of "If The World Is Ending" might have suited the song better.

Overall, this was a great collaboration between two gifted songwriters. A love song with the general doom looming over it that we all feel. It's a worthy answer to our world of constant anxiety.

What They'll Say About Us Song Review

Finneas Made Me Like Christmas Songs: Another Year Review