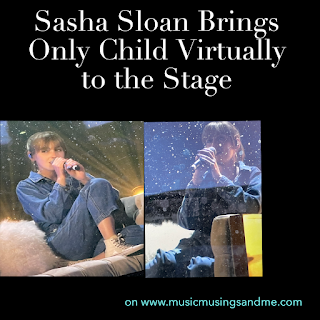 Virtual concerts are more few and far between than they were in the fall/winter of 2020. That's probably because virtual concerts are almost impossible to do well. At this point, I've seen plenty of fans who don't even want virtual concerts from their favorite artists. There's just something about the magic in the air at live shows that make them work that can't be captured through a screen. It takes a lot of bravery for an artist to wander into a new platform and a part of the industry that is still ill defined. Every attempt, though, creates an interesting new portfolio of information to dig through.

On March 24th, Sasha Sloan joined the ranks of those attempting to reach fans through virtual shows. She performed from the Microsoft Theater in LA, broadcasting the show through live-streaming platform Yoop. Yoop sets itself apart from other platforms because they prize an interactive experience with the artists. There was a regular show ticket and an additional VIP add on that was billed as a "Meet and Greet and Exclusive After Party". Like everything in the COVID world, though, there isn't a standard as to what that means .

Sasha played the entire show curled up on the couch while her friend accompanied her on a mix of electric guitar, acoustic guitar, and piano. The setting was quite intimate, and the set they played was fully acoustic, relying on her voice and a single instrument at a time. If nothing else, the concert showcased how truly talented Sasha is. From her pretzel-like perch, she effortlessly sang through her pandemic album Only Child and a handful of songs from her prior EPs. It was wonderful to see many of the songs debut for the first time, and there wasn't a single song that lost my attention. The experience definitely cemented that I want to see Sasha Sloan live when tours return.

What was maybe less successful was Yoop's premise and execution. The platform wants to involve fans in the virtual experience to more closely mimic an in-person show. Unfortunately, as we've all learned this year, most things in life don't transfer seamlessly to the virtual world and many should probably just say memories until we can reunite in person again.

Yoop brings all of the awkwardness of a Zoom meeting into a concert experience. While it was implied everyone would be on-screen the entire event, something I was weary of but willing to try, that wasn't the case. For the main show, maybe 20-30 people were displayed on game show like screens with no explanation of how they were chosen. The awkward sea of faces offered more secondhand embarrassment than sense of community.

Every couple songs, Sasha would pause to choose someone out of the crowd to talk to. Sometimes this went really well and there was a cute exchange, like with an older couple who had seen Sasha in person before and gamely bantered with her. But more often, there were bad connections, issues with muting and unmuting, and lag that made it hard for the interactions to seem at all normal. These moments made it harder to forget about the screen and pandemic and pretend you were at a concert.

After the show, Sasha sang one unreleased song and "The Climb" by Miley Cyrus before proceeding to choose more fans to chat with in what I guess was the "meet and greet" program. It seems totally arbitrary how Yoop decides to bring people into the space. For half of the VIP event, I was "in the Lobby", which meant I could watch myself in a box and watch Sasha on a small screen, but I wasn't pictured in the theater. Eventually, I got brought into the "room", and the picture size, camera angle, and audio quality shifted in a way that really did make me feel like I was watching inside of a box. It was much more disorienting in the exaggerated room space where there was suddenly only one camera angle.

Also, the after party quickly made me realize why paid meet and greets are in 2 minute chunks behind a flimsy divider. It's awkward to watch everyone try to create a moment with their favorite artist. While I'm usually far from shy at music events and would have loved to talk to Sasha, the Yoop room made me so uncomfortable I distinctly did not want to be chosen. As opposed to the tiny Zoom session Sody put on where we all felt connected and united as a handful of fans and got to chat in a group thread on Instagram before, the Yoop room felt like a discombobulated group of people fighting through delays to be heard. And when people did try to seise their moment, it became slightly awkward for everyone as admissions and invitations were offered to Sasha from audience members.

It felt wrong to watch these people tell their personal stories to Sasha from a wall of faces and into the void. I feel like an event being billed as a "Meet and Greet" should feature some tiny amount of one on one time with the artist instead of randomly getting picked from a crowd of VIP ticket holders to have a personal conversation in front of an artist. This portion might have worked better as a more structured Q&A that would've been interesting for everyone present or just generally with more moderation.

The night made me realize that while many of us crave a human element to virtual shows, there's no way to replicate the chemistry of a live show or build it into an empty room. Having seen a variety of shows on a variety of platforms, they seem to be most successful when an artist and their band have a great connection that fills up the room and sets a vibe independently. When there's not a constant acknowledgement of the loneliness and the weirdness of this reality.

I'm starting to come to the conclusion that what makes virtual shows really work is the suspension of disbelief and a willingness to surrender to the idea of a COVID-free dream through your screen. The awkward, glitchy execution from Yoop just kept pulling me back to the low-grade anxiety I feel in all of my Zoom classes where nothing ever works quite right. Involving fans through social media in bigger virtual events broadcast on YouTube or more insulated streaming platforms gave me more of a sense of fandom community than what happened last night. And if an artist is craving true, close interaction with fans and have a small enough fanbase, I still feel like a tiny gathering on Zoom is the way to go.

I do just want to reiterate that none of these comments are really a reflection of Sasha. She put on an amazing show, and my mom and I had a great time. She did the best she could moderating a crowd full of question marks. What really struck me about the show, though, was that Yoop as a platform just doesn't seem to set artists up for success, and the experience felt like another piece of the puzzle in my attempt to wade through what the ultimate form of virtual concert is. There truly is no industry standard when it comes to platforms at this point, and some seem to work better than others.

I honestly don't see virtual concerts, beyond live-streaming in-person concerts, continuing past the end of the pandemic. Attempts to further connect artists and fans don't seem to be working as seamlessly as we all might have hoped.

Reacting to Only Child