All of You Need to Listen to Baby Queen Now 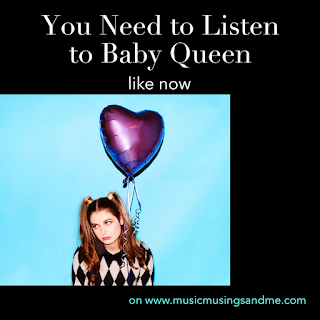 Usually my posts center around new releases or music videos or maybe a virtual show or some interesting music news. Today's post is a bit different. I recently found out about the artist Baby Queen from listening to Jordan Taylor's podcast Both Sides of the Barricade (it's a much listen if you love pop music or fandom). I'd heard Jordan mention her as one of her favorite new artists on multiple episodes (she even convinced Finneas to check her out), but it wasn't until I actually got to the episode where Baby Queen was a guest that I remembered to check her out.

In the episode, Baby Queen, otherwise known as Bella Lantham, talks about growing up in South Africa and later London listening to Taylor Swift and then Halsey and the 1975. With that particular list of influences, I had a feeling that I would click with her music. When I pulled up her Instagram page, an acoustic performance of "These Drugs", her latest single, was front and center. I was immediately captivated. Having been through her entire catalogue now, spanning the 3 released singles and an EP, I can confidently say that I'm a fan and that all of you must start paying attention to Baby Queen right this instant.

She epitomizes the sound of the digital music era where you build a playlist melding 7 different genres and no one bats an eye. Rooted most firmly in pop, like her influences, Baby Queen also dabbles in alt rock, synth-pop, grunge, and complete bubblegum. Yet it all makes sense together.

Her music is unified by the biting observations and commentary on herself and society that proves undeniable. Even as she traverses genres, her lyrics continually build full stories that draw you in from the start. She's unflinching about mental health, insecurities, and the raw elements of life. This bluntness proves endearing to her audience of fellow young women (myself obviously included).

Her songs are topical, as you can tell as you scroll through titles like "Internet Religion" where she talks about beauty standards and the fact that you're able to alter every facet of yourself online and "Online Dating".

In "Internet Religion" she sings, "This is my ego's exhibition/This is my aesthetic competition" and later "Let me show you all the best parts of my life/My clothes and my phone and the gap in my thighs/My friends own things you can't buy/But all of them are broken and most of them want to die". It's a bitingly true look at internet culture and is a new lens on a familiar take. I love how she builds out this glittery world and then flings the sledgehammer through it without a glance back. These lyrics immediately remind me of "Affluenza" by Conan Gray, but they're possibly even more searing as she critiques society while at the same time critiquing herself and everyone who willingly or unwillingly plays the game.

Another of my favorites off her 2020 EP is "Buzzkill" where she opens the song with a talk-singing that has its fingerprints all over the EP. She lays it all out for the listener in the first lines that she's always sad and battles impulse control issues before delving into the less than lovely realities of the world that made her that way. "Saying flaws don't make you special, they just make you flawed/What doesn't kill you makes you wish that it had/And good things happen to people that are bad," she sings in a way that's infuriating yet comforting. She goes on to tell the audience about how her friends think she's a buzzkill and she worries too much, and she knows it's true but also doesn't see a point in changing her outlook on life. She nails the world's flaws squarely- "I'm disillusioned by the world and I am filled with apathy/All of the cheaters prosper and all of the quitters win". All of Baby Queen's music has the distinct element of saying everything you've thought but probably have decided against saying out loud for everyone else's sake. Sure, she won't inspire a more sunny disposition, but you might feel less alone on this sinking ship.

The Medicine EP stays in the world of alt-pop familiar to anyone who's still blasting Badlands all these years later. It also has nods of Charli XCX's generation defining hyper-pop song. Baby Queen manages to expertly absorb the variety in the pop world around her and deliver all the delicious notes swirling through pop in a single track without ever sounding confused or muddled.

So far, in 2021, she's delivered 2 vastly different singles. The first "Raw Thoughts" actually was among the first songs written for the Baby Queen project in 2018. While the lyrics are anything but, melodically and production-wise, the song sounds liberated, free, and sweeping. Like the cheerful, breezy, summer pop of the 2010s without the cloying messages.

Through all of her work, Baby Queen pulls my favorite trick in the musical book by setting her cynical, sad, heartbreak lyrics to upbeat tracks that almost mask the pain. I want to dance and cry, and Baby Queen proves to be the ultimate vessel for that.

My favorite of Baby Queen's work so far, though, is still her newest track and the first I ever heard from her. Something about "These Drugs" is just entirely undeniable. The song is more acoustic guitar based than the raging electric guitars and synths that dot her other tracks. It puts the lyrics farther to the front in a way that immediately draws me in. It's not totally sad-song sounding, but it's a bit more relaxed than her previous tracks. It also showcases the unique characteristics of her voice that prove beyond a doubt that she's singing her own, intensely personal words.

"These Drugs" is relatable whether you've dealt with substance issues or not. I think everyone's has their own version of the drugs in the song- a band-aid for an uncertain, messy life- that will give a window into the song. My favorite lyrics of the song come from the pre-chorus as she builds ammunition. "It's a Band-Aid on a broken arm/A siren sounding out alarm/A fucked-up version of self-harm/And it's louder than a cry for help/When I destroy my mental health/Because I don't respect myself". These lyrics most clearly spell out the meaning of the song where she questions why she keeps herself in a vicious cycle even when she understands exactly what's going on. Being able to self-analyze the problem doesn't necessarily mean you have the tools to fix it, and she so rawly articulates that through the song.

If you're looking for more music that'll take you back to the Badlands days (both sonically and cynically) or a true songwriting talent with Swiftian instincts (and a similar love for big words that shouldn't work in songs but absolutely do) and Julia Michaels's like honesty, Baby Queen should be at the top of your next playlist.