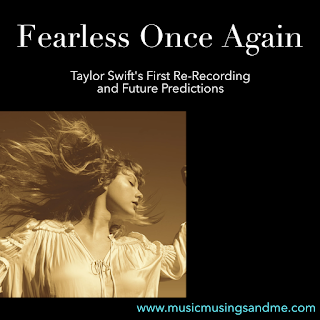 There's been buzz in the fandom all week that Taylor's re-recording of "Love Story" would drop this weekend. I'm not sure what started the rumors, but a Spotify slip up yesterday confirmed it, adding that the new song would be called "Love Story (Taylor's Version)". If you haven't seen it already, Ryan Reynold's commercial for Match.com featured a snippet of the new version of "Love Story", so it was a fair bet that song would lead the pack. Also, what better time to release the track than Valentines Day weekend. Yesterday evening, we also found out that Taylor would be making a GMA announcement in the morning. Everyone started speculating that there could be more in the works than an isolated single.

Still, this morning, I woke up shocked to find an email from Taylor Nation telling me to preorder the new versions of Fearless. Which, of course, I promptly did. Better yet, it features all the tracks from the Platinum release along with SIX bonus tracks from the vault. Taylor had hinted that she might throw on some scrapped songs from the era in the past, but I don't think anyone expected an entire EPs worth of them to come so soon.

Starting with Fearless might seem like an odd choice, given that its her second album, but there are many significant points that bring clarity to that choice. First, Fearless in 13 years old this year, and 13 is Taylor's lucky number. If something is happening in the fandom and you want to figure what is going on or when it'll happen, start looking for 13s. (For example, think about today's date when the announcement and the first single will drop. February (2) 11th 2+11=13). Beyond that, Fearless was Taylor's breakthrough album where it was clear she wouldn't just be a country artist but totally mainstream. The album had so many hits and won her an arm full of Grammys. Fearless also brought the first iconic tour where Taylor got to see the fanbase she'd been building on MySpace and other social platforms come to life. Fearless was a beginning of its own.

It's hard to guess where these re-recordings will progress from here. Will she go sequentially to Speak Now, jump forward to the hotly awaited Red, or go back in time to scoop up debut before going forward? I'm guessing she'll save Red for its classic fall season. It's amazing to think she'll be releasing six of her old albums in a relatively short span of time from the pace she's been going with album releases.

The Fearless announcement, though, did clear up a couple of my biggest questions about what the re-recordings would look like. First, it proves that Taylor will be releasing entire albums again. There was some speculation she might only drop certain tracks, but I was pretty sure we would be seeing full albums. Also, we now know that each release will be a mini era it seems. The album isn't coming until April 9th (which you could figure out by checking the CD ship date or solving the capital letter puzzle (something Taylor included to give secret messages in her early album booklets) to find out the date). Also, 4+9=13. She's also re-releasing singles with "Love Story" being the first. I'm guessing there will be another single or two between now and April. It feels a bit strange to not have an instant album drop after folklore and evermore. These eras will come with merch and physical copies, which was something I was actively hoping for.

Many of us joined the fandom after the first couple eras (I wasn't in it until 1989), so it's hard to go back and find physical music of Taylor's early catalogue, especially vinyl. This gives fans who didn't buy it the first time and those who joined later the chance to pick up the music in a physical form. She's selling a full slate of vinyl, CDs, and cassettes. Because there are so many songs, they're a bit pricer than usual, but it is a double CD and cassette and a triple vinyl (something I've never seen before). She also has merch from hoodies to pop sockets to a lithograph that all fall into Taylor's typically disappointing merch designs (sorry, but she really hasn't been the most original lately). Watch out because the vinyl isn't expected to ship till the end of August. You can check it out for yourself here.

I love that these albums are given there own mini eras to celebrate them as a fandom, and now a much larger fandom, again. It was interesting to see people who had moved on from Taylor getting excited for the new releases and looking back on that time of their life. For as many people as Taylor brought in as fans with her newest albums, it seems like going back in time will include even more prior fans who have fallen off.

In her introduction letter, Taylor reflects on the Fearless era saying, "... this was the musical era in which so many inside jokes were created between us, so many hugs exchanged and hands touched, so many unbreakable bonds formed, so before I say anything else, let me just say that it was a real honor to get to be a teenager alongside you, and for those of you I've come to know more recently than 2008, I am ecstatic that I'll get to exPerience a bit of that feeling with you in the very near future, now that I can fully appreciate it in its whimsical, effervescent, chaotic entirety." This is the perfect opening message and so full of nostalgia.

She goes on to confirm that she will be re-recording all six albums that have been taken from her. Fearless and its new release exemplifies why she believes so strongly that artists should own their work. She discusses how she's the only one who knows the album inside and out. How she knows which songs almost made the cut that she truly adored. She mentions that one reason was there were already too many break-up songs, which means that we'll be getting peak Taylor break-up ballads in the vault tracks. Without the boundaries of CD size or other people dictating her choices, Taylor wants to give us the entire story- the extended Fearless universe. She notes that all of these songs were written when Taylor was 16-18 years old. It's really cool for me because I'm right in-between those ages now.

She closes her note by doubling down on her will to revisit all of her old music. "this project has been more fulfilling and emoTional than I could've imagined and this has made me every more determined to re-record my music. I Hope you like this first outing as much as I liked traveling back in time to recreate it... sincerely and fearlessly, Taylor". Again, this seems to hint that the new versions will be faithful to the original recordings and the new sparkle will be added by a whole slew of new tracks.

I'm hoping that there will also be new live performances and music videos to go with the release. How cool would a Fearless era virtual concert be? I think there are so many places that the era could be expanded and explored further in this brand new, celebratory way. Also, Taylor is poised to set many new records. Billboard has clarified these albums will count towards charts as new albums, and there are so many new records that could be broken depending on how close these releases are. I definitely think this week is probably the end of "Driver's License"'s reign at #1. Though knowing how much of a Taylor fan Olivia is, that'll probably be just fine.

It'll be amazing to get to re-live or live the era for the first time alongside the whole community. Taylor just keeps delivering exciting new twist in a world that has very little to look forward to, and for that, I am forever grateful.

Listening to the Evermore Bonus Tracks for the First Time