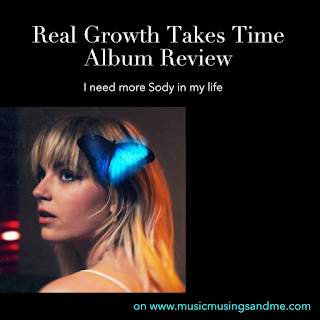 I discovered Sody through the wonders of the Spotify algorithm over a year ago when "reason to stay" came up. I've followed her ever since, and I was super excited to see she was releasing an EP. Unfortunately, it came out the same week as evermore, which led to me procrastinating on listening to it. But I've been contemplating the EP for a few weeks now, and I wanted to write about it because the EP deals in so many themes I'm struggling with right now. She delves into depression, self doubt, and the weird, icky, sometimes magical growing up process.

This song plays on that classic metamorphosis trope that gets stuck to butterflies. While the song isn't particularly revolutionary or new in an idea sense, it's the most pop offering on the EP, and it is generally relatable. I like her sentiment about remembering butterflies' slow evolution and finding comfort in that. I really struggle with how incredibly slow most of life is, so I guess it's a good reminder for me too. My favorite line is probably, "when I'm feeling low/I see you and I know/Still got a way to go/real growth takes time".

Songs to moms are always the most emotional on albums (looking right at you "Soon You'll Get Better"). In this song, Sody tackles a different part of adolescence- seeing your parents as fully realized people. She watches the way her mom constantly sidelines herself and her emotions for the sake of her family. She assures her that it's not her job to give everything to the family. The generic refrain of the chorus, "you don't have to hold it all together" is a pretty universal reminder. What makes the song for me is the final outro where it's confirmed that Sody is singing to her mother. She says, "You don't have to try to please the others/Take all of the time in the world to recover/You should know you're more than just a mother/And I'm so proud to be your daughter". It's an incredibly sweet, sentimental moment. I also liked it because women who have children are constantly defined in terms of their "motherhood" in a way that men and fathers aren't. It feels like they have far more societal leeway to continue being fully realized, multifaceted people whereas mothers are shamed for that, and I like that Sody is giving reassurance that being your own person is most important part of life. It's not a topic covered in many pop songs.

This is one of my favorite songs on the album. The storytelling is out of the world, but I also love the piano that accompanies it and the bounciness of the melody that makes a simply produced song incredibly intriguing. I get the impression that this song is written from the perspective of a parent who passed away or had to leave the child for some reason. The refrain is "I want you to know/That you won't see me/But I'll be there, believe me". The verses trace through different phases of life. It starts by wondering if the child will remember the main character (It wasn't my choice, I had to leave/I hate that when you see me in a photo/I'll be the only person that you don't know"), then it progresses to school age with backpacks that are too big and first day pictures and needing someone to turn to for advice, finally, it ends with teens years about meeting your first boyfriend or girlfriend and singing to songs on the radio. It's the specific details that really make this song pop out from the rest. At one point, Sody sings, "And I wonder what will make you laugh till you're on the floor/Listening to a band I've never heard before". They're such small life moments that build people and make the biggest impacts in the end. This song never fails to get me emotional even though I really have no personal connections to it.

This song veers back to a more typical part of growing up- messy relationships. I love the drums in the chorus and the melody. It captures me every single time I hear the song. The lyrics focus on a break-up where she feels like she hurt her love interest, but it mostly focuses on her internal fears that she's becoming a person she doesn't recognize or doesn't want to become. One of the most striking lines is buried in the second verse. She says, "and I see myself/In other people that I never wanted to become". It's a line that makes me pause every time because it's such a stark admission and incredibly painful. I also like the end of that lyric where she continues admitting fault in an extremely interesting and poetic way, "And I've given scars that I'm not proud of". Scars are common images in songs, but usually only from the perspective of those who've been left scarred, not those who've given them. My only negative comment about the song is that there are some background vocals done by a deep male voice that aren't particularly well blended, and they really throw me off.

I like that the acoustic guitar makes an appearance on this song. I love that quiet, reflective quality it brings to songs. This song continues down the relationship path. It deals in the resignation of being caught in a horrible relationship loop where her love interest keeps coming back into her life trying to start over again. I like how she explores facing the fact that despite everyone's best efforts, they're the same two people, and it's never going to work. There's a bit of a round happening in the last chorus that's really beautiful where she's singing both a refrain and the chorus layered over each other that has a pretty, ethereal effect.

If you like Sody's singles "Charlotte" and "Reason to Stay", this song sounds most typically Sody. In this song, she comforts someone in a dark place who's isolated them. She talks about darkness and them not being able to see the light. It's an interesting song because she acknowledges the damage this person has done to her ("I never hated you for the way you hurt me") while also asserting that she's there to be their rock ("I've got you/I'll be here by your side/When you're needing to cry"). The final outro makes it seem like this person is no longer in her life, which ends the album on quite the somber note.

This EP lives up to its name perfectly. This project isn't incredibly stand out to me, but I think it's a great little cluster of songs. Each one focuses on a different angle of growing up and the lessons you learn from bad experiences. Many of these songs are incredibly relatable, and I think that's a major win for a body of work. I look forward to seeing what else Sody comes up with as her career progresses.

More on the Blog:

1 Year of "The Story" Song Review