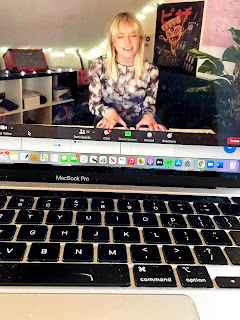 I am writing to you in a post concert bubble of joy. One I didn't expect and didn't have to anticipate very long. As you know if you've read my blog before, I've been a fan of Sody's music for about a year now. If you don't read my blog and don't know who Sody is, she's a British singer-songwriter who you'll probably love if you're a fan of Maisie Peters or Taylor Swift. Her music is vulnerable and relatable. I wrote about her latest EP real growth takes time not long ago, and you can read that here. I'm excited to get to add to my list of concert diaries.

How did I get to this particular Zoom concert? They all seem to have interesting origin stories. I follow Sody online, and she put up a post telling fans to comment an emoji based on their time zone for the chance to win a spot at one of three concerts. I didn't think much of it, similar to when I sent in my question to get into the Zoom with Conan Gray, but a few days later, I got added to a group chat by Sody with 29 other winners. She sent a message telling us what time the show would be and when we would get the Zoom link. I have no winning luck, generally, but I've managed to win two Zoom meetings with my favorite artists now. The group chat immediately came to life, and we talked about all of our favorite artists and where we were from. This was the only music event I've gone to during the pandemic that's managed to also capture the pre-concert, waiting in line buzz where you get to know everyone around you. It's one of the parts I missed most. Even though I find large group chats overwhelming, it was fun to see everyone get excited together. 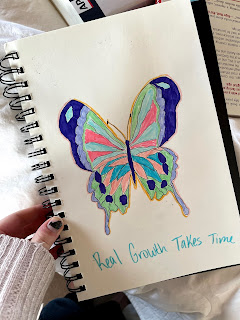 Another element not found at Zoom concerts but present today was the fan project. If you don't know, fan projects revolve around coordinating a particular sign or something to hold up during a certain song at a concert so the artist knows how much the fans care. About an hour before the concert today, a separate group chat sprang up to coordinate a project. We all drew butterflies to hold up during "I'll Be There". It was sweet to see everyone gathering together and harnessing the power of fandom again. Because we would all be on the screen, it was a feasible project. I'll add a picture of the butterfly I quickly drew in the middle of class.

The concert itself felt just like standing in a small venue, all of us held close. Sody introduced each song with a brief story before playing all the tracks on the EP in order. We silently clapped at the end. It's so hard to play live over Zoom because of the lag (I've never actually seen an artist pull it off), but she handled it gracefully. She even joked about scrambling to get premium Zoom so the show could be longer than 40 minutes. She also read the chat between songs, even fielding tech errors that you'll know well if you go to school on Zoom. It would be so hard to focus on performing live and running a Zoom at the same time. This was by far the most intimate online concert I've been to. There weren't moderators or managers running the show or tons of rules like most I've been to. Sody was situated in a cute corner of her room and ready to chat. She offered a level of genuine connection that is so often missing during virtual shows.

After finishing all the songs on the EP, there was an intermission of sorts to answer questions. We got to raise our hands to get unmuted and have our questions answered. I managed to get called on first. I guess I've perfected a "pick me" face from all the time I spend in Zoom school. All of the questions were extremely thoughtful. It was so cool to be at a little event with people who truly knew Sody's music and had spent time thinking about their questions. With bigger artists, there are always people there who just somehow stumbled in, so it's rare to find a group like today's, especially with contests. 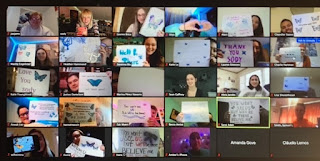 Then, for an encore of sorts, Sody sang "bedroom ceiling" and "Charlotte". She'd asked us in the group chat beforehand which one of the two we wanted to hear as a bonus song, but the vote was split about 50/50. In the end, after multiple votes, she decided to just play both. When the songs were over, she took a final photo (she'd also taken one with all of us holding up our signs), thanked us, and said goodbye.

This concert managed to be everything I'd longed for in the previous Zoom shows. Sody did a great job of creating a genuine connection with everyone there. So many people see being forced to moves shows to digital as a disadvantage, but she harnessed the power of the internet to create a special experience to strengthen her bond with her fans and celebrate the new EP. This project stemmed from the original lockdown time, so it was a full circle way for it to be performed.

From the Instagram group chat to bring fans together to running the Zoom herself and talking to us through the whole thing like friends to checking the Zoom chat and answering questions, Sody made herself feel close and more accessible. There weren't any stumbles in creating an online atmosphere that mimicked the buzz of a concert. It felt like a journey we were all in together. There was no distance or cold feelings, and it was so much fun to get to see other fans loving the music in real time as I did. Virtual shows often feel like a movie more than a concert, and all the fans having their cameras on helped that disconnect. I guess experiences like these are one of the benefits of following newer artists, but I wish more artists followed this model to engage with fans in small groups and small shows when possible. Even for more popular artists, Zoom offers the chance to play small shows again and connect with fans on a tighter level than an arena tour would make possible. Virtual concerts haven't quite found their footing in the wider industry, but they are an incredible tool, and Sody presented truly the best of what they can be today.