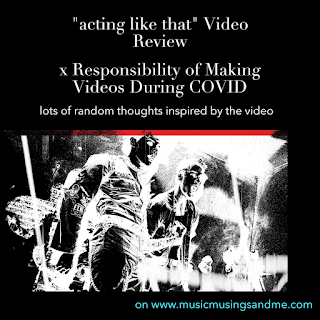 I'm waiting for the day that Yungblud, MGK, Travis Barker, and maybe Halsey form a band together because they've sure done enough songs between the various trios to fill at least an EP. "acting like that" isn't among my favorites of those collaborations, but there's been a serious lack of music related content lately, so I was excited for this music video drop.

The video concept is a bit strange. They needed to negotiate the issue of Yungblud being in London and MGK and Travis Barker being in LA. In the end, a phone call from a red telephone booth serves as the bridge between the simultaneous zombie apocalypses happening in both cities. Yungblud jumps off the party bus into a weird wasteland. When he gets on the phone, the zombies come out to attack them. MGK and Travis play from a basic set up behind a metal fence where the zombies are crushed together on the outside. Yungblud plays from the top of the bus where he has to kick off zombies from down below. There's also a confusing rave situation with Yungblud on the inside of the bus where the other people don't seem to be zombies yet, but they sure are packed together?

MGK and Travis fade towards the end, and the scene fully turns to Yungblud who meets Abby Roberts on the top of the bus. She seems to be full zombie, but he's entranced by her and follows her down the stairs of the bus. When we see him again, stumbling out of the darkness, he's full on zombie with tons of gore and blood. Honestly, the gore make-up is pretty rough, and I don't quite get the goal of this video. I'm also confused about why Abby Roberts (a TikTok famous make-up artist) is suddenly everywhere that Yungblud and Liam Payne are, especially considering they're such fundamentally different people. She's seriously having a moment. I'm guessing they felt like Yungblud needed a main co-star since MGK and Travis had each other.

Also, I understand they have to make music videos that are interesting and flashy for their job, but with the pandemic getting increasingly worse, it was a bit demoralizing to see the packed bodies of people swirling around the background for no reason. The people in the LA shots aren't even featured well because they're stuck behind the fence, and I think Yungblud's wasteland scenes only needed Abby to create the storyline. The mosh of bodies didn't add much, and it just made me sad.

Yes, I know they were all tested and took precautions, everyone says that, but I'm reaching the end of my personal rope with all of this special treatment for celebrities. Rapid tests can be inaccurate. They miss people with COVID or who will develop COVID symptoms shortly after the test all the time. Beyond that, do we need to be wasting tests on giant video shoots? There are reasonable uses of testing and additional people in videos, and this isn't one of them. Yungblud recently released a video for "Mars" that was quite compelling. It featured 4 or 5 different people who were shot solo. Yes, it took a crew and being around people and a certain amount of risk to film that, but that style allows more time in masks, more distancing, and honestly a show of sensitivity for what everyone is going through right now. Yungblud's "Weird" video, shot in his quarantine house. and "Heather", which Conan Gray shot in his apartment, prove that you can create compelling videos in the safest way possible with a close team of a handful of people. These videos likely turned out better for their limited scope too.

I guess I just don't get the why of this video. What about the song said "zombie apocalypse that needs a mosh of people"? It would be a fine video in a normal world, but this just hit a sour note with my lonely self that's been stuck at home for over 300 days. And this isn't to place the weight of all irresponsible pandemic action on Yungblud and this video. I believe Yungblud has the best of intentions, but it does feel slightly hypocritical with how politically active and conscious he is while still participating in shoots like this and for "Cotton Candy", which he traveled for. He's going along with what everyone else in the industry is doing and technically doing his job. I guess there's no fault. But I think MGK's presence and his continual flagrance for COVID rules and realities put me on edge from the start of the video. From the giant "WAP" video and Gaga music videos to the TikTok kids getting together for no reason and using "we tested" as a Band-Aid to Dua Lipa telling everyone to stay home and then jetting around the world, I'm just getting really, really tired of watching a parallel universe where the rules are suddenly different. I know that the pandemic has been going on for almost a year and it's no longer "cute" to make DIY style videos from home, but the pandemic isn't over. I don't feel like we should all move on in entertainment till thousands of people aren't dying a day. It's getting hard to watch these double standards, and I wished the industry as a whole would reflect on the messages they're sending to those who are watching.

People need to stay out of clubs. Don't simulate one in your video.

God Save Me But Don't Drown Me Out Music Video Review