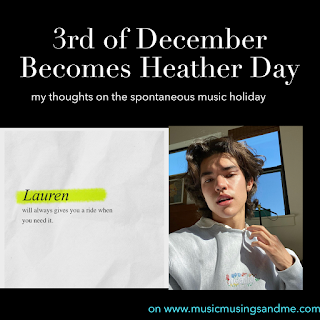 I didn't honestly think "Heather Day" would be a thing. The idea was vaguely floating around on TikTok. People, for about the last week, have been making videos to the "Heather" sound saying that they needed to fall in love on December 3rd. Like most of "Heather"'s life on TikTok, these videos thoroughly missed the point of the once quiet album cut. As much as "Heather"'s life on TikTok irritated me, I'm glad they spawned this impromptu day of celebration and recognition based on the opening line of the song, "I still remember/3rd of December". Everyone wants a sweater, but likely, none of us will end up with one, just like Conan in the song. Honestly, I was confused why we were celebrating a day that Conan got his heart crushed, but having watched the day play out, I'm glad it happened.

For a little background, "Heather" is the tenth track on Conan Gray's debut album Kid Krow, which came out at the height of the pandemic in March. The song was mostly just a fan favorite in the fandom, and one Conan had called his favorite a handful of times. And for good reason. The song is a beautiful track about the stabbing pain of being the second choice and the infuriating realization that your crush's crush is just too good to properly hate... though maybe you still kinda too. There's so much nuance in the lyrics, and the track is dark and yet somewhat angelic. While it's always ranked towards the middle of the album for me, there's no denying it's meant to be a quiet classic, a slower take on the time old story chronicled in other songs like Taylor Swift's iconic "You Belong With Me".

And then something weird happened around late summer. "Heather" found its way to TikTok. While I'm not the most well versed in the TikTok world, despite being in their key demographic, I have seen the trends. Most of them are upbeat pop songs like "WAP", "Say So", and Miley's version of "You Only Ever Call Me When You're High". These tracks come with dances or some prescribed act to bring them to life. Conan has even previously had a viral hit (that's somehow picking up steam again in the last few days) with "Maniac". Again, "Maniac" tracks as a TikTok song. It's pop, loud, and has aggressive, dark lyrics perfect for awkwardly acting out on video. Yet it's "Heather" that is Conan's crowning TikTok hit.

The song started as a venue for lamenting unrequited love, perfectly tracking to the song. Then it evolved to a strange eye movement type challenge completed by famous TikTokers Charli D'Amelio and Addison Rae (some more successfully than others). As major TikTok songs do, "Heather" started rising on the Billboard singles chart, and it earned a music video. It spent twelve weeks on the chart and peaked at number 20, his highest charting song yet. TikTok is a powerful tool for propelling music at the minute, and it boosted most of his social platforms over 3 million, from Instagram to TikTok to YouTube. At one point, TikTok was his most followed platform, though he rarely uses it now. He crowned Charli a "true Heather" on his stories and also gave the distinction to Tate McRae, who recently covered the song. "Heather" went from being the stupidly perfect object of jealousy to an awkward term of empowerment. I appreciate the sentiment, but I also didn't get it in the context of the song. Also, only using it to uplift extremely famous, seemingly perfect celebrities didn't add much to the empowering narrative. If "Heather" was going to be an honorary term, it should've been given to fans who covered it or made art around it.

Unfortunately, the song getting big started to strip the nuance and unspoken rules started to get broken. Through the fall, there was an invasive dig for the "real Heather" after Conan made the mistake of saying that Heather was her real name. Many girls claimed to be Heather but didn't live anywhere close to Heather. It was gross and strange, both the desire to find Heather and the crush, neither of whom asked to be involved. For parts of the fandom, the song got a bit soured as people kept mistaking it as some kind of love song or aspiration. In the Genius interview about "Heather" Conan makes the excellent point that the point isn't Heather and that claiming to be Heather is assuming you must truly be perfect. I'm hoping this particular venture has died down, even as the song has remained popular.

I was nervous this morning and last night as Heather and 3rd of December started to trend that it would be a day devoid of nuance, full of people wanting romantic sweaters and to fall in love on a day otherwise marked with heartbreak. Instead, it took a much better, more positive turn. It offered a space to celebrate how far Conan's career has come. With "Heather" being his biggest hit yet, December 3rd turned into a day of community and accomplishment marking. It created so much fun reflection, and even fans who had said the song had been ruined by TikTok had to give it a stream. Most of them had to admit it was still an incredible record, despite the association. Regardless of how it happened or the bumps that have come from it, exposure is exposure at the end of the day, and "Heather" will forever be a giant career milestone for Conan and the fandom. It also spawned one of Conan's most special, vulnerable music videos. And that is worth celebrating. Conan also took to social media far more than usual to reveal some secret treats for Heather Day.

The first was a new crew neck limited edition that says Heather and has embroidered flowers on the grey crew neck. Fans (including me) balked at the $75 price tag. He also brought back the limited edition maroon colored "your sweater" crew neck from the original Heather themed merch drop. If you're interested in either one, you can shop his store here (when I went to grab the link, there were also signed CDs). He modeled the new look for Instagram as well.

For those of us not wanting to spend money, he had another surprise for Heather Day. In a swipe up, he shared http://iwishiwereheather.com. This website, as many pointed out reminiscent of https://doyouknowwhoyouare.com, lets fans type in their name to get automatically generated, personalized messages. These all tell you about who you are as a friend and mention what Heather would think of you. It's a cute website with a cute design. Harry Styles fans weren't a huge fan of the similarities, but as a fan of both of them, I love that this website format is getting expanded. It's been a genius element of Harry's Fine Line campaign, changing with each era, but it's truly just an auto generate website. It's a cute way to connect with fans, and I'm surprised it hasn't been implemented in more national music marketing plans because it's effective. I honestly hope I see a wider roll out of it soon. On top of that, he made two TikToks to promote the sweater and the website in a total content blitz that hasn't happened since the album drop. 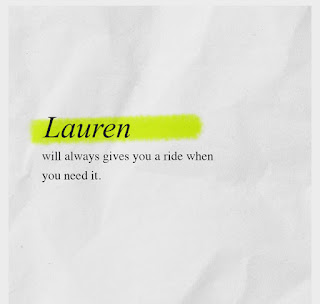 All in all, today was fun and eventful and a way to flip a negative date from the song into a positive celebration of achievement and the power of music to travel and connect people. And, from what I've seen, today has been mostly free of some of the toxicity that has tainted "Heather"'s rise. I haven't seen everyone online this truly happy and excited in a while. I've never seen something quite like this with a swell of people from the wider world creating a trend and making their own day. Despite the tightest fandom's nerves, those who made it trend in the first place wanted to celebrate the trend, and we have them to thank for a lot of growth. It was so cool so see so many Heather related phrases trend nationally and internationally, and it had a lovely, warm and fuzzy feeling. I'm still marveling at this spontaneous quasi-holiday.

Two Years of Generation Why