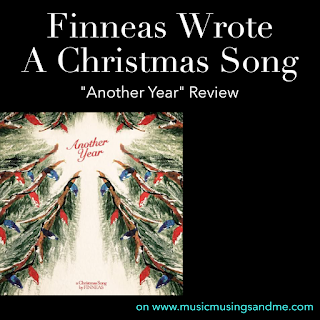 This is a song review I never thought I'd be writing. As all of you know, I live and breathe music. Or most kinds of music. I'll listen to almost anything... except Christmas music. I honestly cannot stand it, even the most famous and beloved songs. I love Taylor Swift with everything in me, but "Christmas Tree Farm" is a song I only need to hear once, and I think I skimmed through her early Christmas album. Needless to say, I wasn't thrilled that Finneas's latest musical release was a Christmas song.

I honestly wasn't going to listen to it when I saw it drop this morning, but then my mom sent me an article from Rolling Stone about it, and the headline called it "clever", so I figured I'd give "Another Year" a listen.

He won me over in the first couple lines. I've heard it about five times now because my phone keeps repeating it, and I keep forgetting to turn it off. I think that's a good sign, though. Most of the time, I can't turn the volume on Christmas songs down fast enough.

Finneas keeps the holiday motifs and imagery, but he spins the general holiday feeling into an admittedly sweet love song, presumably for his girlfriend, Claudia. The most traditional part of this song is the piano underneath it that has an undeniably wintery feeling. There must just be a Christmas chord progression, because it's instantly recognizable as a holiday song. Luckily, there are no jingle bells involved, and the song stays a comforting piano ballad (which probably helped it a lot because there's nothing I love more than a good piano ballad).

Getting into the lyrics, there's an irreverence and a contemplation that helped me buy into the song, even as someone who falls onto the Grinchier side of the Christmas spirit thing. He opens with, "It never snows in LA/You'd never know it was a holiday". Instantly, that told me that this wasn't going to be your regular, candy cane song.  It was also relatable to my childhood Christmases. Even though I live in a snowy place now, I grew up with Texas holidays where I was always in shorts. The next line cements the song as a true Finneas work and made it even more relatable for me. "I don't believe that Jesus Christ was born to save me/That's an awful lot of pressure for a baby". Which, he definitely has a point there. He continues to talk about how he'll take the extra time to be with family and friends, even if he doesn't totally buy into the origin of the holidays. He also rejects the consumer culture around Christmas, telling everyone not to "waste a dime on me".

The chorus takes the song in a sweet, love song direction. "Hurry home, please, I don't belong without you/Your ice-cold feet; write all my songs about you/I love you more and more each day/Can't find a poetic way to say/"I hope it lasts another year". This chorus is cute because it has that puppy love feeling, but the last line is my favorite. I feel like it grounds the chorus and keeps the song in a realistic realm. I think my problem with most Christmas songs is that they're overly cheerful and completely removed from reality. Here, Finneas acknowledges even though he's in this seemingly perfect relationship now, there's no promise it'll always be like that. There's just hope, which is all that any of us have.

In the second verse, that doubt is expanded upon further, and he starts to play on my favorite storytelling trope, love that is important and amazing now and that's the important part- not whether it works out. I love you for now, and hopefully ever. "Don't have a clue where I'll be/Except for next to you on New Year's Eve". That first part of this line hits me harder considering this was written last year in a time where we had no way to fathom how completely different this year would be. Then he goes on to list a new part of the holidays he doesn't subscribe to. "I don't believe a resolutions going to change me/That's an awful lot of bullshit, ain't it, baby?/But here tonight, drunk my the firelight/The future could be bright, though no one's sure about it". This last line is also particularly hard hitting during COVID. While it would've been depressing if the song came out last year, we're all still holding onto hope that by December of next year, life could be better again. The last part of the verse is my favorite part of the whole thing. "And if the ending's sad, at least these times we've had/The good outweighs the bad/You wouldn't know without it". I'm a firm believer that the bad makes the good even better. And I like that the real message of the song is that sometimes good moments just matter as good moments, not what they amount to in the end. And if you are a devout happy ending person, things do still seem to be going well for Claudia and Finneas, so there's a dose of satisfaction a year later.

Overall, I'm a fan of the song. I probably won't listen to it all that much or add it to a playlist, but it gets to sit (ironically) with my other favorite Christmas song, "All I Want' by Liam Payne. Though Liam's music generally disappoints me, his break up/Christmas song might be my favorite in his discography. Clearly I like Christmas songs that are just set at Christmas but not really about the holiday. Now I just hope that Finneas is the first and last of the artists I love to put out Christmas music this year. If you want to listen to it yourself, I'll embed the Spotify page below: