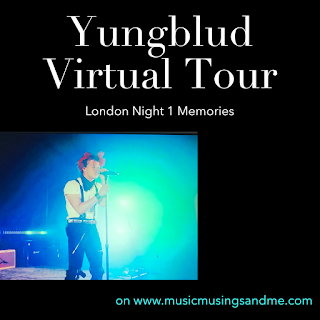 I just got finished watching Yungblud's first concert on his Weird Time of Life Tour, which is the first virtual tour ticket I bought back in September. I've been to two virtual shows before (Billie Eilish and Niall Horan), and they've all been such different experiences. Yungblud's is the first show that is part of a tour, though. The other two have been one offs. Also, Yungblud's is the first that had opening acts. This means he played a 30 minute set which makes sense considering he's playing sixteen nights worth of different shows.

Getting into it, I forgot that he had two openers. Having opening acts definitely changed the experience. The first opening act was Baby Queen who I wasn't super familiar with but had a super cute background that they'd clearly put effort into. The second opener, whose name I can't seem to find the on the internet, was great. We were all interested in finding more of her music. When I see the Munich stop, I'll have to make note of her name. I felt so antsy waiting for Yungblud. These virtual shows have made me forget how to be patient through opening acts.

When Yungblud finally arrived on stage, he started loud with "Strawberry Lipstick". He has no problem bringing plenty of energy to the stage, whether he's being propelled by a crowd or not. He played a set that mixed released songs from Weird!, unreleased songs from Weird!, and older songs like "Parents" and "Loner" that are classics at this point. With the set only being 30 minutes, that didn't leave much wiggle room in the set. Since his sophomore album got delayed by a couple months, these sixteen Weird! shows are going to be three weeks of previewing the album. This is bittersweet because it's cool to have them unveiled piece by piece, but it's also a touch painful because I just want to hear the new songs repeatedly. I've had a taste, and I definitely want more. I'm sure someone has screen recorded and shared, but I have a weird personal rule around live events that are digital where I don't rewatch them again beyond clips. It just makes it feel more real to only get to live it one.

In London's opening set, he debuted "ice cream man", "mars", "it's quiet in beverly hills", and (I'm assuming because he either didn't announce it or I missed it) "superdeadfriends". If you read my post when the track list dropped, you know that these were among the ones I was most curious about. I was wrong about "Mars" in the best way. I assumed it'd be loud and in your face, but it's a quiet, beautiful song that truly shows off his voice. It's the one I'm craving to hear most again. "it's quiet in beverly hills" was the title that intrigued me the most, and I enjoyed that quite a bit as well. Yungblud played it on acoustic guitar. "superdeadfriends" started with Yungblud playing the piano and turned into an anthem. It also closed out the set. My least favorite of the new releases is "ice cream man", but it's an aggressive song, and I had a hard time picking up the lyrics in my one listen. As much as I love Yungblud, I struggle with some of his loudest, most punk songs. It took me months to get into "strawberry lipstick", and I'm sure I'll come around eventually to this one too. For the first six months I followed Yungblud, I only listened to his acoustic EP, which should give you a good idea about my general preference. As for the rest of his set, he played all the released songs from Weird! except for "god save me, but don't drown me out".

Watching a concert at 11am was an experience I never expected to have. Watching the London stream was a cool experience though. It's strange watching a concert in the morning, when it's not dark out, and there's a whole day to accomplish afterwards. The experience might have been heightened at night, but I still had a blast at the show, particularly the second half. Yungblud didn't shift his performance style at all because of the screen. He'd approach the camera to try to get close to the "crowd". He mentioned repeatedly how he just wants to be with us, and he instructed us to sing, just like you would at an IRL concert. In his ideal world, everyone would be moshing in their bedroom, and that's a valiant effort. To enhance the experience, he told everyone to post reaction videos and their outfits to #ybvirtualtour. This was the first concert I dressed up for, and while I was in sweats again by the time Yungblud took the stage, I had a ton of fun planning a Yungblud themed outfit, getting ready, and taking photos. It really did feel like the entire concert experience. (If you want to see the outfit, I posted it on my twitter and instagram @mslaurenbrice).

Overall, I can't wait to go back to three more shows. The ever changing set adds a layer of intrigue, and Yungblud has so much bouncing energy that always makes him fun to watch. I'm also excited to see all the different outfits. I loved his pants and boots from today. It makes me wish I could go to all sixteen dates. While he should've definitely charged more (and deserved it plenty), I'm glad $5 tickets means I can live my dream of going to multiple shows on a tour. It also just increases the accessibility so much more. My next stop is on the 22nd when I'll be up at 10am to see Yungblud play Munich. Then on December 1, I'll see the Boston show, and I'll wrap up my Yungblud tour journey with the LA show on the 6th, right after the album release. I really wanted to see both the first and last shows, but I couldn't bring myself to get up at 2am to watch him play Sydney. I'm excited to bask in the last of my scheduled virtual concerts.

god save me, but don't drown me out Single Review