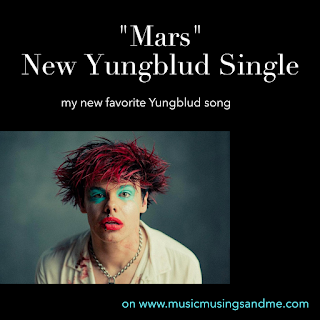 I've loved "mars" since he premiered it at the London opening show of the virtual tour. I was immediately drawn into the world of the song and captivated by the start of the story. It felt like the song I'd always been looking for. I needed to hear it again, but I'd forgotten to screen record the show, so I had to wait a week until my next virtual date. I thought about it every day between the shows. I couldn't get the words that I had caught out of my brain or the haunting, sad, quiet start bursting into that anthemic rush. I just wanted the song to be released, and now it's finally out in the world. I put "mars" up there with "this is me trying" in songs that just hit me way too hard. It's like that uncomfortably perfect level of seen.

Though the song was stemmed from a story a he heard from a trans fan who finally found comfort in his music during her transition, I think the song broadly applies to any kind of outcast as well. He addressed this in his Instagram post announcing the video saying, "this video for it is about all of us. from racial inequality to oppression against the lgbtqia+ community to transphobia, climate change denial and beyond. we, us, our generation are going to be the ones to change it."

While this is a pretty standard sentiment for Yungblud, I feel like this song is one of his best at capturing the thoughts, feelings, hopes, fears, and dreams of the outsider. While making your entire brand a home or community for the outsider could get trite or cheesy, Yungblud pours so much honesty and integrity into it that it's impossible to claim it's an act. He genuinely wants to help us, and through that, help himself.

I'm also in awe of his consistent ability to tell other's stories without feeling like he's robbing them of their experience or talking over a voice. While I think everyone in his songs should go on to tell their own stories themselves, he writes with an openness to that happening. There's a feeling that this is his lens, and it's far from the only one. He also relates each anecdote back to himself in a way that refuses to center himself in the narrative. I'll be forever impressed with that ability to compile and share stories to his audience. To make people pay attention. It becomes like a scrapbook of sorts, and he's the glue instead of the pictures.

The lyrics themselves are absolutely beautiful, and I love his voice on the track so much. I guess I'm extra attached to this song because I find so many traces of myself in these lyrics so specifically. It's funny how lyrics about one very detailed story can get morphed and changed to perfectly click into so many wildly different situations.

"She was only seventeen/Had the saddest pair of eyes that you've ever seen". That's such a great opening. It also doesn't hurt that I'm 17 right now. But there's so much intrigue in the just the first two lines. "Wore them lips in the cold, it was matching green/But she can't be herself when she's somebody else/In the morning she would take her mother's wedding ring/But school got pretty tough when they'd see it gleam/So she hid herself under the mezzanine/Re-enacting scenes, ya". The wedding ring anecdote is an interesting center to talk about the bullying and set her up as an outcast. Also the re-enacting scenes adds to the idea later that she probably wants to be an actress. It's a good detail to slide in at the start. "Mezzanine" is such an interesting sounding word. I hadn't heard it a ton until Halsey used it in "clementine", but it's a truly good song word.

The pre-chorus is my favorite repeating section in the song. "She dreamed she'd go to California/Where everyone would adore her/And all her mates would call her/Till four in the morning". I think every loner has that wild, runaway dream. California, when you've never been, is this weird world of possibility and acceptance. Also, going anywhere means a chance to start over. A chance to introduce yourself as the person you've become instead of the one everyone's decided you are in any sense. Even if it's not true, leaving means a chance for better. I also like the detail about friends calling you till early in the morning. I think when you spend all your life alone, told you're destined to stay like that forever, there's a mythology that gets built around friendship. Just being wanted at all would feel like a mountain of an accomplishment. I love that detail. Also, not to make a million Halsey references, that lyric reminds me of "3 AM". If everyone's calling you into obnoxious hours, you never have to sit alone with your thoughts for too long.

The chorus is simply a repetition of "Is there any life on Mars?". Apparently, this is a reference to a Bowie song, but I also think Mars has always just been the home of the outsider. The place for aliens. I've definitely had moments where I wondered if I could've come from Mars. I like this question. There's an idea of we came from there but also the idea of we could go there and find others like us. There's a true desperation that rings through his voice here.

"Every morning she wakes up with another plan/Yeah, her Mum and Dad, they couldn't understand/Why she couldn't turn it off, become a better man/All this therapy eats away gently at this side of her mind that she never had". This first half of the verse obviously makes a lot of sense in the context of the song's origin but also applies well so broadly. I think we've all had at least one person in our lives disappointed by the way we turned out or a path that was taken. I also like the idea of that agency coming off the chorus. The plans, the rehearsing, putting in the energy to make something work. "Yeah, this story told too many times, it makes me sad/I bet the author made a fortune out the autograph/Give her money back, cause". This second half twists the lens more inwards and seems to be Yungblud giving his outsider point of view for the first time. This is a story he's probably heard so many times in so many different versions. Just cited on the genius page alone, he talks about two different meetings with trans kids that helped inspire the song directly, but beyond that, as someone who stands up for LGBTQ rights and mental health, I'm sure he hears daily stories about kids who have learned to help themselves through his music. Artists who are vulnerable in their work have such an interesting perspective. Everyone has told him their happy, sad, hard, and tragic stories, and he's absorbed them all. I also think the author comment is interesting. I'm not quite sure what he means by it, but I take it as either the author of the life story or about those people who profit off of other people's pain stories. Again, this song could've very easily become that, but Yungblud is so dedicated to the idea of the fanbase being one giant group that he's simply a member of that he feels immersed enough to pull it off. He knows how to address it with the right level of respect and distance.

As you can tell, I love the song, and I like the video as well, which I'll link below. In the video, Yungblud and others, smear their face with various make-up and get attacked from all angels. It's a simple video, but it's surprisingly visceral and impactful.

Reacting to Yungblud For the First Time