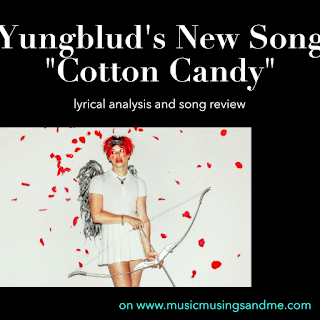 Last night, Yungblud dropped a new song called "Cotton Candy" that he's been hyping up all week with a variety of photo shoots and some excited screaming into Insta stories. Regardless of my mood at the moment, I always get excited about Yungblud releases because his enthusiasm is infectious.

This is maybe the poppiest sound I've ever heard from Yungblud. It has pop's trademark repetitive chorus, a lighter, bubbly sound, and some of pop's biggest writers on the track, which I'll get into more in a minute. I'm always fascinated by how Yungblud traverses genres so easily and fits them all under the wing of his eclectic image. I know that there are really no genre boundaries anymore, but outside of maybe Halsey, I've never seen someone blend everything together so gracefully on the same album. He does a good job of creating something for everyone and leaving the listener with some tracks that push their comfort zone or expose them to something new.

As far as where "Cotton Candy" lands on the track listing, it makes perfect sense. "Strawberry Lipstick" comes right after it, and while that song is much louder and more in your face, it shares a similar subject matter to "Cotton Candy". Both songs seem rooted in celebrating sexuality, living in the moment, and having fun as your authentic self. I love that Yungblud's songs, regardless of their main subject matter, always have an element of celebration of identity at the core of all these songs. Speaking about the song to NME Magazine, he doubled down on this saying, "This song is so important to me because I see and speak to my fan base, facing insecurities around sexual interaction and I want to let them know that it is ok to be EXACTLY WHO THEY ARE and have the right to unconditionally love who they want and be loved in return".

Jumping into it, "Cotton Candy" starts with a cool base riff before the other instruments and his voice get added in that's a bit different than most of the other music I've heard lately. The melody is much more pop rooted and flowing. It's funny reading the lyrics while listening because I pronounce a lot of words very differently than Yungblud does in his Doncaster accent, so even though the words were right in front of me, the audio still was full of surprises. Something about the guitars that kick in, the repeating lyrics, and the melody gives me a boy band vibe for the chorus almost. I feel like his accent really sets the song apart in the way and gives the song a unique vibe while playing with some of those sweeter, syrupy tropes. The song is a little predictable and not my favorite Yungblud song, but it's still a lot of fun and probably the closest thing to a true "bop" Yungblud has in his catalogue. I also like how he's expanding the genres he's dabbled in. This isn't his only pop song because pop is so wide, but it's the closest he's come to bubble gum. From a structure perspective, it has a basic pop structure (verse, prechorus, chorus), but it lacks a bridge, which makes it shorter than average. Instead, he repeats the chorus a second round to drive his point home.

It's cool how the verse starts with a name. It's like we're all in the pub and he's telling us a story. "Tallulah knows that she's not the only one I'm holding close" which tells us a lot about the situation the song is taking place in. You know there are a lot of different people and hook ups. I really like the lyrics in the rest of the verse. "On the low, I get vertigo from body overdose" is such a cool way to articulate how many different people you're seeing. It's like a whirlwind that makes it hard to find your footing. I love the word vertigo in general and "body overdose" is such a cool way to look at what's happening. "So tell me your name, and tell me your problems/I got the same". I like this casual lead in here and also that there's a layer of getting to know each tier and commiserating over shared problems and relating to one another.

In the pre-chorus, I couldn't help but make a connection to lyrics in a song by one of my all time favorite artists, Halsey. Here, Dom writes, "And I wanna get stuck between your teeth like cotton candy/So you'll remember me darling". Before getting into the connections, on face value, this lyric sounds cool, but does cotton candy get stuck between your teeth really? I guess it's all stringy sugar, so maybe. I wouldn't know because I claimed to be allergic to cotton candy at age 7 and have never had it since. Now, getting into the Halsey connection, in "Finally//Beautiful Stranger" Halsey sings, "Stuck between my teeth just like a candy bar". It's an interesting lyric parallel. Normally, I wouldn't point this out because this stuck between my teeth lyric shows up in tons of songs (the other one that comes to mind is "Only Angel" by Harry Styles), but Halsey has specifically said that "Finally//Beautiful Stranger" is about Yungblud so it creates an interesting dialogue.

Then, in verse 2, he dips into a bit of his usual world commentary that bubbles into all of his songs. Here, he's using the broken world as justification to go to escapism. "I figured out that the modern world is/Turning the wrong way 'round/There's something about the way/Our bedsheets turn religion upside down/So we just have sex to solve our problems/Let's do it again". The verse has that broad feeling of abandonment and it plays on that trope of losing yourself by stumbling into a whole bunch of bodies and losing feeling. The interesting part about "Cotton Candy" is that it's more about gaining joy and happiness and connection than turning on autopilot and zoning out to physical bliss. There's a lot of thought and emotion and commentary that runs through here that I think elevates the song quite a bit.

Getting into the writers on the song is interesting as well. I saw some names that pop up a ton through pop music (particularly with Selena Gomez), but I didn't expect to see them here. They're Julia Michaels and Justin Tranter. That's how you know you've got a pop song. In addition to Justin and Julia, Yungblud, of course, wrote on the song along with Chris Greatti and Omer Fedi.

Overall, this song is a fun departure that adds to the eclectic notion that's already running through the album. I'm excited to see where this album goes next. Can it be November already?

"god save me, but don't drown me out" Yungblud video

Best Videos Made At Home

Reacting to You Ruined New York City For Me

Two Years of Generation Why

Wrapping Up This Week In Music: Julia Michaels and Shawn Mendes