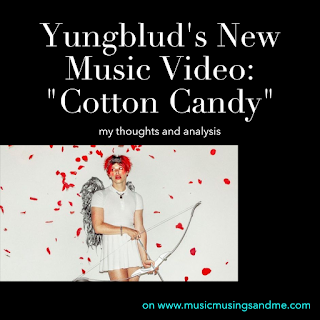 If you missed it, last week Yungblud dropped a new song, "Cotton Candy" off his upcoming November album, Weird!. I wrote about the song here if you want to read my thoughts on it. Now, the video is out in the world, and it is just as bright, outlandish, and lovey as the song would indicate. It's definitely NSFW, though, so use discretion when viewing.

I wasn't sure how I'd end up feeling about the video. I really don't like videos that play on nudity or shock factor and "Lights Up" or "You Should Be Sad" is about as sexy as I care to see in videos. Yungblud did a great job of having sex as a central theme, as it is in the song, while still making it palatable to people who would rather not have that shoved in their faces.

First off, the sets they use are super cool. It's probably my favorite part of the video. They're all interconnected and tell their own story. I like how he's able to move through them in inventive ways. It starts in a dated room with shag carpet and a bed that's in a pit in the floor. It's like a strange, make-out heavy slumber party with a Valentines decoration scheme. There's a really cool hatch in the side of one of the walls of the bed that a guy pops out of which is random and fun. It goes well with the set being a character too.

They use an interesting transition multiple times throughout the video where Yungblud is singing directly into the camera and then this couple leans in in front of him and starts sloppily kissing as the cut, Even though it personally made me cringe, it's a fascinating artistic move.

The second scene is my absolute favorite. Yungblud jumps down from the living room set and crawls out of a hole in the wall into this funky, public bathroom set, except for its not gross and is actually super cute. I love the deep blue and pastel pink color scheme in this part. It starts with just his band (in various stages of undress) and a janitor lady in the room with him, and there's an old fashion mic hanging from the ceiling. This part is my favorite probably because I LOVE his outfit. I've been a huge fan of this white angel look since he debuted it in clips teasing the song. It consists of a tight, white polo with a white skirt that's somewhere between school-girl and tennis. I'd love to know where he got it because I want one... The look is completed with some white, platform Doc Martin shoes, a headband, and pink socks, of course. All the white makes his red hair pop super nicely, and the angel wings are super authentic looking (whatever that means since none of us have seen an angel). I also appreciate the fact that his tongue is blue in this scene like he really has been eating cotton candy. The outfit is perfect. In this scene, there's a girl that's all over him while he's singing and then there's a cute moment where he gives the janitor lady a kiss on the cheek and dances with her. Eventually the room fills up with all the same people who crawl in through the different entrances and the party starts in there again.

I kept thinking of the "Wish You Were Sober" music video both because the weirdness is mediated with a lot of humor and also because every single background person has a distinct character and personality that really shines through. Videos are always so much more interesting when every person in the shot feels important.

Another random observation is that there are a few pixelated moments that didn't seem completely necessary in so far as the YouTube rules go. In a way, it sort of draws your eye to whatever's happening in that frame that they're trying to cover. I can't decide if they were intentionally trying to do that or if they truly felt they needed to do some blurring. I guess in the second instance it's more important, but compared to some of the stuff Miley put out during the Bangerz era, it made me wonder. Also, if you knew you needed to blur, just show a little less when filming and problem solved. For that reason, it seemed more like an artistic choice.

Yungblud leaves that scene in a poof of neon chalk dust which is fun and goes with the angel look. He pops up again in the strangest scene yet, yes, weirder than the first one, in leopard print and against a creepy jungle situation that was not my favorite vibe. The back up dancers are also in very 80s metallic swimsuit looking outfits, and I didn't really get why their presence was necessary. The cake eating/throwing clips in this section were super fun and one of the highlights. Who doesn't love a food fight?

It ends back in the first room with everyone joining the pit of bodies, all overlapping each other, with Yungblud in a shirtless suspenders look at the center of it all. Then, the camera pulls back to reveal the sets and how they were all connected, which was super cool. I love that they included that. Then we see the "director" who calls cut and the crying prom girl from the video walks out to kiss him. There's plenty of cheering and then the video closes with a card that says "sex ain't a sin", which has been the slogan for this whole song promo run. It's funny that both videos I've watched this week ("Fake") includes a shot at the end where they pull away from the main shot to show off what the set looks like. It gives it a more casual, relaxed feel that I really like, and both videos take place on an interesting series of prop sets, so it's fitting to show them off.

Overall, I thought the video was fun. It conveyed Yungblud's message and the message of the song super well. I appreciated that he had a good mix of guys and girls throughout (something you'll notice in a lot of Harry Styles's music videos too), and it felt very inclusive. The sets and how they communicated with the context of the video was a cool element, and I love the angel outfit. My only critique is that COVID-19 is still very much a problem and that was a LOT of touching and closeness. I'm sure everyone was tested multiple times, but it still feels a bit surreal. Just like how the song is never going to be my favorite Yungblud song, this video won't be my favorite video. I simply don't relate. I'm glad he's out there, though, spreading his message of inclusivity and acceptance and having fun in a safe way because those are all important points to make to his fanbase. Whether he's doing scary or sexy, Yungblud's videos always have an edge of humor and a wink of cuteness that make them approachable to the otherwise adverse.

If you want to receive updates on new blog posts, make sure you subscribe my email on the home page or give me a follow on Twitter @mslaurenbrice where I share updates. If you want to read more of my old articles on Yungblud, I'll link those below. I'm also adding a list of all the music videos I referenced in this review for you to check out if you'd like. I'll embed his new video here as well along with the song on Spotify. Don't forget to subscribe to my YouTube Channel for even more music content (link below).

More on Yungblud....
My Thoughts on Cotton Candy
"god save me but don't drown me out" music video thoughts
Weird! Album Announcement
Videos Referenced....
Lights Up
You Should Be Sad
Wish You Were Sober
Fake
Subscribe on YouTube!
Fletcher You Ruined New York City For Me EP Reaction
Top 10 Taylor Swift Music Videos of All Time
More on Music, Musings, and Me...
"Fake" Lauv and Conan Gray's New Song & Video
Ranking All of Taylor Swift's Music Videos
Two Years of "Generation Why": Thoughts on the Lasting Song