Making Predictions for the 2020 Billboard Awards 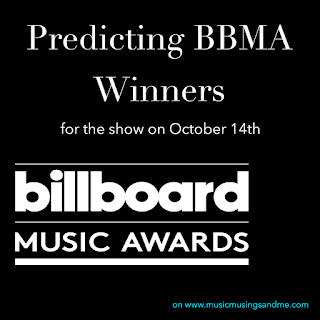 I've always gotten overly excited about award shows for someone who doesn't put much stock in who wins or loses. Also, the shows usually aren't very good. They're always awkward and the performer line-up is never who you would choose, but there's something thrilling about watching how it goes. Particularly now that it's the closest we're getting to a live music experience or an event.

Anyway, on Wednesday (on NBC at 8pm EST), the Billboard Music Awards are finally happening after getting pushed in April. They'll be taking place in LA, but I imagine it'll either be largely prerecorded like the VMAs or mostly virtual. In today's YouTube video, I make predictions for all of the major categories, but there were a few I wanted discuss that didn't make the video. I thought it would be fun to discuss them here. To watch the original video where I explain the eligibility period, how the Billboard Awards work, planned performers, and major category predictions, click here. If you don't have time to watch the video but want a feel for how the awards work, scroll to the end of the post where I'll leave all the explainers.

Now that you've gotten a feel for how the awards work and who I think the big winners will be, let's check out some of the more specific categories.

This is so difficult. My instincts say BTS because they have great sales and the most devoted fanbase on the planet, but I hesitate because they're still not major players on US radio (which is its own issue for another day). And, in the eligibility period, they were still breaking. Dan+Shay's major singles were released in 2018 and played through 2019. The Jonas Brothers had a huge year and are already major players in the US market, so they might take this one. Maroon 5 also always has a radio single, so they're not out of the mix.

Predicated Winner: BTS (have they ever lost an award?) or Jonas Brothers

I’m assuming this is coming from ticket sales and profit from the tour? In that case, it goes to Ed Sheeran, hands down. He had the marathon tour of the century and played sold out stadiums everywhere. Everyone else on this list played arenas (I believe) which puts them at an immediate disadvantage. And I believe Ed probably played the most dates too.

I did go to two of these shows (Pink and Ed) and they were both incredible. I don’t care how you feel about Pink’s music, go to one of her shows. Her acrobatics, dancing, and live singing the entire time is truly a sight to witness live. She was one of the artists that defined my childhood.

Ed also puts on an incredible show. For as wowed I was by Pink’s flashy moves, there’s also a level of impressiveness in being able to hold the attention of a stadium full of people completely alone.

Talking about specific albums, this plays out similarly to what I said about Billboard 200 artist. I think it goes to Lover or When We All Fall Asleep, Where Do We Go because both of those albums broke records. The trick here is if record breaking first week sales (Taylor broke her own record from Reputation) or an unprecedented longevity is a more important factor. For that, I have a hard time deciding because Taylor's first week definitely put her ahead by quite a bit. Still, I think Billie's sticking power is key.

Predicted Winner: When We All Fall Asleep, Where Do We Go or Lover

Of course, these are all the biggest records of the year. I'm going to eliminate "Truth Hurts" and "Señorita" first because I think they had the shortest runs on the chart. "Old Town Road" and "Someone You Loved" both had a slow, sustainable climb up the chart. They were sleeper hits and had been on the charts for months before they peaked. "Old Town Road" beat a record for it by taking 17 weeks. "bad guy" toppled "Old Town Road" from its number 1 spot but had spent nine weeks at number 2. It's hard to say where this lands.

Predicted Winner: "bad guy" or "Someone You Loved"

As you can see, streaming is a different game. As I said, rap and hip hop tend to do better on streaming. "Old Town Road" also got most of its momentum from streaming. Post Malone is infamous for his streaming power and playlisting though, and "Sunflower" got a few awards at prior shows. I also feel like oddly Post Malone crosses over into the most potential genres and formats.

Radio is such an interesting, tricky game that requires proper promotion from the label, response from listeners, and placement on stations and in the right format. It's a fascinating world and hard to break into. All of these songs were undeniably radio hits, and you couldn't escape any of them. I'm going to say it's probably between "I Don't Care" and "Someone You Love" because those were the two I heard in the heaviest rotation. I'm going with Capaldi simply because one of the radio hosts I listen to said she was happy Capaldi wasn't releasing anything new this year because she was so sick of him after "Someone You Loved" got played in almost every break.

Predicted Winner: "Someone You Loved"

This one being fan voted for a specific collaboration is so difficult to figure out. I don't see a ton of people being invested in voting in th because these songs were big such a long time ago. All of these songs seem over. Also, none of these artists have fanbases that are known for their voting power. Shawn and Camila probably have the youngest fanbases that would most likely be on TikTok. But they're such divisive couple. Bieber has a big fanbase, but they've never stuck me as the most active voters. People love Lil Nas X, but that song's moment passed so long ago, I can't see people making a huge effort to vote for it. He hasn't been able to follow it up, so his artist identity is wavering a bit.

These are all my predictions for the 2020 Billboard Music Awards. I want to state that these predictions aren't based on who I want to win. I'm purely going off who I think will win because I'm entertaining myself with the game of seeing how many I get right. If we were going off personal preference, I'd have made some different calls. Here's the guidance I used to make the predictions:

How the noms/winners are made: Billboard Music Awards nominees and winners are based on key fan interactions with music, including album and digital song sales, streaming, radio airplay, touring and social engagement, tracked by Billboard and its data partners, including Nielsen Music/MRC Data.

*It is important to note that there are a couple fan voted awards this year including Tip Collaboration, Top Social Artist, and Billboard Chart Achievement*

This voting is taking place primarily on TikTok

Come back to this space Wednesday night at 8pm EST to watch along with me. I'll be updating the post with my thoughts on each award and performance including a running list of winners. I'll also be sharing which categories I got right and which ones I missed on. It'll be tons of fun. I'll also be tweeting through the night. Make sure you're following me @mslaurenbrice to keep up with the fun. Let me know in the comments if you're excited for the BBMAs and your thoughts on who the big winners will be.
Subscribe on YouTube
Watch my BBMA Predictions for the Big 10 Awards
Reacting to Fletcher's You Ruined New York City For Me
Top 10 Taylor Swift Videos of All Time

Past Award Show Coverage
More On Music, Musings, and Me...
All My Thoughts on Yungblud's "Cotton Candy"
Ranking All of Taylor Swift's Music Videos
Two Year Anniversary of "Generation Why" by Conan Gray
Wrapping Up the Week: Julia Michaels & Shawn Mendes
Award Shows Music News