I Might Be In Love With Blackpink Now... a review of their new documentary blackpink: light up the sky 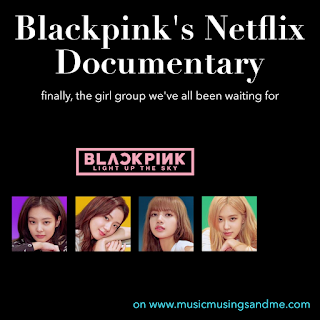 For a weekend treat, I decided to take some time to watch the new Blackpink documentary on Netflix. I was pretty sure I was going to love it from the start (given that I am a total nerd for documentaries, especially ones with anything to do with music), but I got so much more invested than I expected. Now I'm here to tell all of you to run over the Netflix and watch it. I haven't enjoyed a movie this much in a long time.

Also, as a side note, before I get into it, Netflix has produced an amazing line-up of music documentaries lately. There are tons of originals if you look through the music category. Miss Americana from earlier in the year was truly amazing, and they have even more slated for the year, including new ones next month.

Getting into the Blackpink documentary, it's a very classically framed music doc in the sense that it's framed around "the one big show". Thinking back, Taylor's documentary is one of the few that doesn't time jump back from a main, big performance. The first Justin Bieber documentary centers around him selling out his first Madison Square Garden show; this one is built around Coachella.

Given that the movie is produced by the K-Pop company that manufactured Blackpink, YG entertainment, I wasn't sure how revealing the movie would get, but I was pleasantly surprised by how open and vulnerable the film felt. While it wasn't an ugly deep dive that showed the worst moments (and who would really want to see that?), there was plenty of acknowledgement of the intensity of K-Pop training and the toll that takes on mental and physical health. They showed the girls contending with sprained ankles, intense pain, and feelings of homesickness and depression from pressure. There was even a piece that talked about the expectation of perfection and all the rules for K-Pop stars around tattoos, drinking, and relationships. It felt like an honest, balanced view of the reality. Going into the documentary, I was most excited about that insight, so I was glad they delivered on it.

Beyond getting a full look into the process of becoming a K-Pop trainee, we also learn how they all got into K-Pop in the first place and became trainees before they were put together. It was fascinating to learn about all their diverse backgrounds that helped inform the group. If you're already a major Blackpink fan, you'll love the behind the scenes content and cute moments of the girls hanging out and goofing around together, but it's probably most interesting if you don't know much about Blackpink. It is a wonderful introduction. I identified with all the girls, and I'm so in love with their style and make-up looks.

There are plenty of present moment interviews and scenes of them together, but the beginning of the movie takes the time to introduce each girl individually, give a look into how they grew up, how they trained and for how long, and what role they serve in the group. I like how they take that time, and it gave me the impression of truly getting to know them. They're all so incredibly likable and relatable. I'm pretty amazed. Jisoo is the oldest and the only member both born and raised in South Korea. It seems like Jisoo auditioned for YG on a whim after enjoying drama club, and she trained for five years.

Then there's Jennie who was born in South Korea and raised there till she was ten. After that, she lived in New Zealand for five years until moving back to South Korea to join the training group at YG. Jennie trained for the longest time- six years. While she's super bold and confident on stage, she definitely struck me as one of the most reserved of the girls.

Rosé is my favorite member. Early on in the film, there's a scene of Rosé sitting in front of a computer playing piano and guitar, learning different songs. I immediately related to her, since that's how I spend most of my time. She laments that now that the band has broken into the mainstream, there's far less time for just playing music. She also strikes me as the most natural musician from the beginning. It was funny listening to her recount stumbling through her first dance lesson at sixteen. Rosé was born in New Zealand and raised in Australia. Her father encouraged her to follow her passion for music and audition when YG came to Australia for auditions. She trained for four years and joined the training group after the other girls had already been there for a while. She stayed in the dorms with them, and they immediately bonded through training. She joined at the oldest age. Rosé talked the most about homesickness and the loneliness and uncertainty of training. Another moment I connected to was when she recounted calling her parents to vent about how miserable she was during training, and they would tell her to come home, but she said that was the last thing she wanted to hear.

Then there's Lisa, who's the funniest, most uplifting member of the group. She's the lead dancer and a rapper. Lisa was born and raised in Thailand. During her trainee days, she was mostly tasked with choreographing their dances. Lisa trained for five years, and since she's the closest in age to Rosé, they became fast friends. I loved seeing their friendship. It was interesting to see how the four of them were all close, but they had closer bonds with the member similar to them in age. While the age spread in the group isn't as wide as most boy/girl bands or other K-Pop bands, (there's only a two year age gap between the oldest and youngest), it makes sense that the friendship bonds were formed in that way.

There's plenty of behind the scenes of their current world. There are many scenes of them picking out outfits for photoshoots, packing, and navigating their current life. For those who want a glimpse into the K-Pop training process, there is also that in detail. They walk through that period by showing old audition and practice footage that the girls watch and react to in real time. They also featured their producer, Teddy, heavily. It was fascinating to hear his prospective on the group since he's had experiences in a K-Pop group and got to watch them rise from the inside and out. Since he writes and produces all of their released songs, he's super close with them and understands how they work well, but he can also see their place in the wider industry better than the girls can on their own.

My last note that I found interesting was that beyond the signing and dancing lessons that one would assume K-Pop stars take in training, there's also a lot of language learning involved. One of the girls mentions coming out of Korean classes in one of her stories, and there are so many different languages spoken in the film. The girls speak in a blend of Korean and English, and Lisa speaks Thai as well. I loved how all of these languages meshed and interplayed with one another. Sometimes a member would start a sentence in one language and finish it in another. Because all of the girls come from different places, their native languages are all a little different, and it was cool to hear them talk about pairing up with one another to work on a certain language and learn it together. Similarly, all of their cultures and world-views are shaped a little differently which adds to a really interesting mix between the four of them. Their style is impeccable (and seems very self driven), and I'd love to learn how to replicate their make-up looks. The doc is so aesthetically pleasing because of it. I want to live in the Blackpink universe.

You walk away from the doc feeling like you know the girls. While they seem perfect and larger than life, there's also a down to earth, authentic element that draws you in. I've always liked Blackpink, even when I knew nothing about them, and now I have reasons to back up my PCA best group vote. While their music isn't really my thing, their style, dancing, personalities, and dedication blow me away. I've followed the group account and all the girls individually on Instagram, and I can't wait to keep watching their rise. The world needed a record breaking girl group.