Forget Me Too Music Video: All The Thoughts 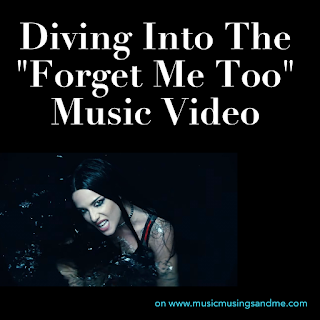 Today is a PACKED day for music related releases Halsey x MGK gets the first coverage of the morning because their collaboration video just dropped today at 9AM PST. "Forget Me Too" is Halsey and MGK's first collaboration after being friends for years and is off his new album, Tickets to My Downfall. I wrote about the song (and a bit on the album) when it first released, but I wanted to give my updated thoughts on the video since it came out this morning.

We first learned about the existence of a "Forget Me Too" video when Colson posted a TikTok lip-synching to the song from set with Halsey. She later tweeted that she almost died filming the video for it, so the hype was real. Now, on October 22nd after everyone got scared they might have forgotten to release it, the video is out.

okay forget me too @halsey

Halsey still has yet to tweet about the video dropping, but everyone has already started sharing their favorite screenshots and some of Halsey's best fashion moments throughout the video. Between the CMT performance with Kelsea Ballerini last night and this music video, everyone is on a Halsey high while Halsey herself is tweeting about 4AM internet browsing.

Anyway, on to the video. It's a short video for a short song clocking in at 2:58. They pack a lot of excitement into the video for that time. It seems like the video was filmed at MGK's house because the pool matches the pool in the album art (which again, I believe is at his house, though I could be wrong). If it is, that would go with the COVID safe video necessity well. It starts with Colson working on his motorcycle in the backyard before he starts to twitch and shift around almost like an unseen person is attacking him. This happens perfectly in time with the frantic guitar and drum beat wall of sound clashing in. He rushes to the bathroom and uses a razor like object to pry a magic 8 ball out of his back, which, like how did that get there in the first place? This is intercut with clips of him playing his signature pink electric guitar out back by the pool.

When he stares into the 8 ball, where there's usually a discouraging triangle with answers to all your problems, there's Halsey pushing against the glass. It looks like she's trapped underwater, and I'm guessing this is where her dying reference came from. He exists the bathroom and smashes the drawing of the two of them hanging on the wall, not the last instance of flying glass in this video. This act echoes the line in the song "You're the reason I punched a hole in the wall back home". While the song is about a back and forth relationship and has some softer moments, the video is all fiery anger all the time.

After throwing the photo, MGK exits the screen and Halsey busts through the front door with a concentrated stare on her face. She's wearing a very "if Avril Lavigne was Halsey" outfit with tall, leather lace up boots, a short school girl style skirt and a tight, quarter length sleeved crop top that has a number on the front and glitter stars on the sleeves that gave me a flashback to when I used to shop at Justice. She throws a part of his motorcycle in the pool before we go back to MGK. He pulls the skin away from his eye and we zoom into it to find Halsey back in the dark water pit.

The 8 ball in his back and his eye as a transition definitely adds an unsettling edge to this unsteady break up anthem. Her eyeliner is on point in this scene! Her makeup is dark and incredible and her long, black hair swirls around her as she treads water in the pool. She looks ready to attack. This scene is intercut with MGK jumping on the bed and playing air guitar. I'm pretty sure he's wearing a denim jumpsuit that's mostly unzipped and white boots.

This scene is transitioned out of by first going into Halsey's eye and we zoom faster and faster through both of their eyes, alternating back and forth. Maybe this is supposed to represent going into both their minds and seeing things from different prospectives since the duet shows both of their problems with this on and off again relationship. We pull out back into the bedroom, but this time Halsey is there dancing in a cowgirl hat and her original outfit while we go back to the intercuts to MGK playing guitar by the pool. She goes out to the living room where his guitar is sitting now and plays with things on the coffee table till she finds the 8 ball. When she looks inside of it, he's trapped in there, and she throws the ball at the glass sliding door in anger. I guess the 8 ball is meant to be a device to show them both questioning their relationship and the answer is always the other person even though it would be easier to move on.

When the door shatters, Colson walks in through the breaking glass to grab his guitar. Halsey is magically gone from the couch and is walking back through the door again. I'm not sure if there are a couple continuity errors in here or if they're always existing as figments of each other's imaginations and that's why they seem to be able to disappear when the other shows up.

Suddenly, there's a confrontation when they're allowed to exist in the same space as once. Travis Barker is magically transported into the living room and it turns into a bit of a jam session as MGK is also playing guitar through this phone thing. Halsey goes between cupping his face and shoving him back, again illustrating all the messy feelings happening in the duet.

In the end, maybe it was all a dream because Halsey backs away and suddenly he's alone in his living room without Halsey or Travis. Then he gets on his bike (without a helmet; what is it with music videos and motorcycles and the lack of safety measures!) and drives away from the scene.

I'm still not sure how much of that was meant to be real and how much of it was supposed to be a dream or an illusion or something. For as confusing as the video is at times, it's a lot of fun and one step closer to the punksy album everyone wants. She looks amazing in the video, and there's a lot to pay attention to at once. While it's not one of my favorite videos, it was still an energetic way to start the morning. Watch it down below.

Forget Me Too lyrical Analysis

Happy Birthday to 929 and Deluxe Songs

I Might Be In Love With Blackpink: Review of their New Doc