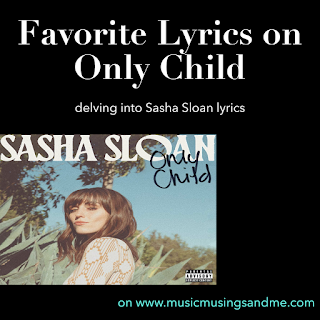 Sasha Sloan released her debut album last Friday (10/16). I've been excited about Only Child since she started releasing singles this summer. I've been a fan of Sasha's for almost a year now, and I'm a huge fan of her various EPs because I love her quieter indie pop sound and the fact that so many of her songs delve into topics that don't get covered in music often. She frequently discusses body image, childhood trauma, depression, questioning religion, and the effects of divorce. While she also has quintessential love and break-up songs, those other themes always struck me the most because I'd never heard anyone address them the way Sasha does. Luckily, that remains true on Only Child. The album has an amazing amount of trust and intimacy, and I think that stems from the album being almost entirely written and produced with her boyfriend King Henry. I love albums that are made in such a close way. Today, I shared my full reaction to the album on YouTube, sharing my true first listen with you. If you want to watch, click here, or I'll add it down below. I pointed out certain lyrics in the reaction, but I wanted to collect all of my favorites in a post here.

Is It Just Me?

Talking to Apple Music, Sasha shared that she wrote the song after a reflective moment realizing how small she was in terms of the universe. She added, "The song is a little bittersweet, like, "Hey, I feel like this really small person who has no purpose here, but you give me that in some way." But I thought it was a nice way to kick off the album."

In that same Apple Music interview, Sasha shared that she's wanted to write this song for a long time but didn't quite know how. "I'm pretty cynical, I grew up really fast, and it was just my mom and I for a very long time. And only children often feel like outsiders, because we don't learn how to fight with people, how to make up with people, how to grow. So it know of summed me up as a person. It felt all-encompassing.

Someone who's been there before/Caught sneakin' in the same backdoor

When our parents fight, we'd just smile/It gets lonely being an only child

House With No Mirrors

Sasha explained to Apple Music about how the song came about. "I remember putting on this pair of jeans and breaking into tears. They were a little tighter than they used to be, and I was having a really off day, and he said, "Man, we need to get you a house with no mirrors." We ended up bringing that title into the studio session, and the woman we were working with connected with it immediately."

I would say when I was hungry

This song comes from a fascinating point of view, and I noticed listening to the album that "Lie" and "Someone You Hate" are two sides of the same experience. Her comments to Apple Music seem to indicate that's true. "When I wrote this, I had just gone through a breakup, and even though I was the one who broke up with him, I felt equally heartbroken, maybe even worse because of the guilt that came with it.  Going back over everything in my head- how he felt, what he was thinking- is how 'Lie' was born."

I want you to lie, lie right no my face/Want you to put your hands on my waist

"I literally went to the dentist yesterday because I thought I was dying of a tooth infection. There was nothing wrong with my tooth. This is the level of insanity we're dealing with." Sasha jokes with Apple Music explaining how much she's transitioned in her health belief through her positive relationship.

I abused my kidneys/Knew I had two, so I didn't think twice

Is It Just Me?

This song was entirely inspired from Reddit. Sasha wrote, "I'm completely obsessed with Reddit and I love the subreddit Unpopular Opinions. I knew I wanted to write a song about it... It took forever because I wanted to make sure that all my examples were actually somewhat unpopular opinions, but without going too far."

I hate holdin' babies/And people tryna save me

Think religion is a business/Where you pay for God's forgiveness

I'm a huge fan of this song because I relate to Sasha a lot here, so I wanted to share her whole Apple Music quote here. "This was initially meant to be a jab at being cynical and jaded, and growing up to realize that shit's basically rigged. But then the pandemic happened, and the world caught fire, and it was the first time in my life that my problems felt truly insignificant because everything else seemed so bad. I was in first grade 9/11 happened, and while I was aware that something tragic was going on, I was still playing with toys. I didn't grasp it. So 'Santa's Real' ended up being about how I sometimes wish that I was still a child so I wouldn't have to reckon with how grave things have become." It's an interesting pivotal moment when you realize that there's no one sweeping in to save you.

I wanna live in a world where Santa is real

Sasha noted about this song, "It's the most literal I've ever been about my ex in a song, and I think it's because enough time has passed that the wounds have begun to heal. I can revisit what went down without shielding myself from pieces of it. And that's important because in music, there's power in specificity. That's what makes the song relatable." I love that she notes that the song is relatable because of the specific lyrics because that is so true.

We were growing, growing apart/And I knew I had to break your heart

Until It Happens To You

In this song Sasha recounts the divide that happens when you support someone going through a hard time, but you can never truly know how it feels until it happens to you.

Somebody loses their somebody every day

This is one of my favorite songs on the album. I love how she's writing this letter to her past self to reassure her. Even though the song started as a joke, her co-writer Shane related to it and decided they should take the song further. Sasha noted, "Even though I have some regressions, like on 'House with No Mirrors', I like the fact that the album ends with the line 'I wish I could go back/Tell her it's okay'. It's saying, even though things aren't perfect and I don't fully love myself yet, I'm still okay."

I won't say it gets better/But fifteen doesn't last forever

Wish I could go back, tell her it's okay

All My Writing on Sasha's Music
House With No Mirrors- Song Review
Lie- Song Review
Only Child Reaction
Subscribe on YouTube!
Check Out My Fall Playlist & Get Music Inspiration
Reacting to mxmtoon
More on Music, Musings, and Me...
I Might Be In Love With Blackpink Now: Documentary Review
Fall Playlist (Full Playlist)
Yungblud's Cotton Candy Video
Fake Song and Music Video Review
Favorite Lyrics Sasha Sloan Song Reviews What's In my Earbuds