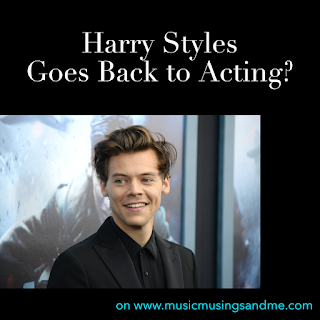 I would be lying if Harry Styles didn't cross my mind while I was writing my piece on Halsey's acting debut yesterday. Beyond the fact that I think about Harry Styles at least once a day, he's had a history with acting, and the rumor mill around that is constantly swirling. If you didn't know, he starred in Dunkirk in 2017 in his first acting role (unless you're counting when he played himself in iCarly. Please look the clip up on YouTube). Headlines got made at the end of last year around his album release that he was set to be Prince Eric in the live action Little Mermaid. That got quickly debunked during the press tour, though he had been considered for the role. Touring was more important. (And I'm honestly glad he passed. Disney has yet to successfully pull off a live action adaption of a princess movie). Recently, his name started trending on Twitter because there was rumors he was starring in a movie alongside Brad Pitt. It later came out that neither Harry nor Brad were actually in the movie. When I saw this announcement, I assumed it was fake too, but I'm staring at the Deadline article in front of me. It's actually not a hoax?

I'm both super surprised and not surprised at all. I'm waiting to see how many of my favorite musical artists end up in TV shows or films in the next year because while the film industry is stumbling along in this COVID world, the touring side of the music industry is at a permanent stand still. While you can record and release new music, there are a lot of tricky situations with doing that now. Acting offers the perfect opportunity for artists put on pause mid album cycle (as both Harry and hassles were), the chance to keep working and stay relevant without doing anything that would complicate their rescheduled tours. If the pandemic continues well into 2021, artists might have to abandon some eras unfinished, but so far, we can still hold out hope for the tours we once looked forward to.

So instead of playing Fine Line to sold out arenas and headlining Harryween, Harry Styles will likely be on the set of 'Don't Worry Darling' as they're set to start production sometime in the fall. This movie already has a lot of clout even without Harry attached. It's Olivia Wilde's follow up project after Booksmart smashed records (though had mixed review from the people I knew who saw it), and everyone in Hollywood is anxious to see what they'll do. It also stars an acting world darling, Florence Pugh. Chris Pine is also named as part of the cast.

It seems like the project has already had a few bumps as Harry is stepping into Shia LaBeouf's role after he was forced to quit because of a time conflict. Still, it seems to be a priority for the production company because there was a major bidding war over the rights to Wilde's next film. Also, according to Deadline, there have been reports that the executives at Warner Bros have been anxious to find a new role for Harry ever since they saw his performance in Dunkirk.

As far as what the movie is actually about, no one knows super well. It's been called a thriller in a few headlines. Deadline describes it as, "set in an isolated, utopian community in the 1950s California desert." So I guess there's a Sci-Fi or speculative twist as well? This seems to be a far cry from his first project.

The screenplay is by Katie Silberman, though it was inspired by a spec script by Shane and Carey Van Dyke. Catherine Hardwicke is the executive producer along with the Van Dykes. Also producing are Wilde, Silberman, Roy Lee, and Miri Yoon.

While I'm not a huge fan of movies in general and the short summary doesn't seem like something I'd typically gravitate towards, I'm thrilled to see that the project seems mostly female driven from all standpoints from writing to direction to production. It also sounds more interesting to me than Dunkirk, which I'll admit I still haven't watched. War movies will never be my thing. Harry has also talked a lot about how he'd only go back to acting if he found a super compelling role. He seems to be selective and intentional about who he chooses to work for. Even though I haven't seen Harry act in a movie yet, I've seen plenty of his skits for SNL and James Corden, and he definitely has talent. I'm looking forward to seeing him in a full role, and I hope it has a bit of a comedic edge because he really doesn't get enough credit for his comedic timing and gift in that sense. It'll be interesting to see what the role entails and how he'll interact with the other actors. The internet is flipping out about Harry and Florence sharing the screen.

I'm glad Harry is finding new ways to flex his creative muscles in quarantine, though I'm always anxious about getting new music. He was recently spotted close to a recording studio in London (or there was a rumor) so that might also be in the works. I know that during Dunkirk, Harry gave up music for the duration of filming. I wonder if that will be the case again. At any rate, the COVID shutdown does offer plenty of space to work on a completely new project in a new field without disrupting music, which has always been his priority. Maybe being a part of these tested, contained film sets will offer Harry (and Halsey too) a safe way to get some new life experience to write about since our worlds have become so small in the last few months.

Are you excited about Harry's sophomore film? Let me know in the comments.

Also, make sure you read about Halsey's new project here.