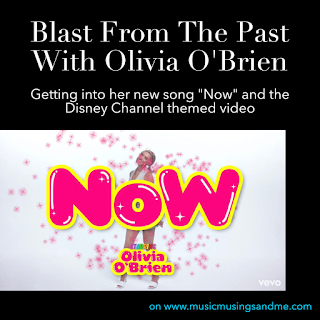 Last night, Olivia finally gave us some new music on the heels of "Josslyn"'s success on TikTok. She's obviously been ready for a while, lamenting to Zach Sang earlier in the summer that she has so much music she'd like to put out, but her team wanted to see if they could get "Josslyn" to take off on radio. While the song was probably too explicit to really get mainstream popularity, it was still a hit for her. Fans have been anxiously waiting for new songs since an EP or another micro mixtape was promised to coincide with her Coachella set. Obviously, the festival didn't happen, and neither did the new music. There's been no word on whether "NOW" is a one-off or if it's tied to a new body of work.

Getting into the song and video itself, Olivia has talked about it being an homage to the early 2000s and particularly that period on Disney Channel. It is a deliciously dated throwback, and I guess I'm officially old enough to feel nostalgic? Olivia is only 3 years older than I am, so our childhood memories hit about the same place as far as TV goes. It's so cool to follow artists who are basically my age because of things like this.

She starts the video with a talking segment about all the lies boys will tell you and how not to fall for them. She's in a silver, glittery look with futuristic pigtails. When she said "Hi, I'm Olivia O'Brien" and drew the heart in the air like the "You're watching Disney Channel" commercials, my heart skipped a beat, and I knew I was sold. The video proceeds to flash between a ton of familiar scenes. She has so many different looks in this video, it's hard to keep up. My favorite was definitely the Lizzy Maguire moment with the pink streaks and little, animated feature. I also loved Drew (@drumaq)'s cameo on the park bench.

As for the song, it has similar vibes with plenty of early 2000s reminiscent "nah-nah-nah"s in the chorus (sampled from "Right Now (Na Na Na) by Akon). I think it's a fun bop overall, but it did take me a couple listens to even feel like I was hearing it. It's structured to be a pop powerhouse ear worm, opening with the chorus straight off the bat. The song basically chronicles her disillusionment with the guy she's dating and her discovery that he's cheating. She chides him for being stupid enough to think she wouldn't find out. There's a lot of repetition and the verses pull on a lot of cliches and tropes to string themselves together. The idea of not getting a fairytale ending, thinking someone was a gentleman but they weren't, and thinking someone was so special like "That kind of shit that give a girl a heart attack".

While I would dance to this at the club happily, I find the lyrics leave a lot to be desired. The throwback sound is cool, but she also pulled in the empty, repetitive lyrics that haunt some of the songs from that era. I love Olivia because she's always able to say exactly what I'm thinking, even when we're dancing. This one misses the mark that "Empty", "Like I Don't Exist", "I Hate U, I Love You" and even "Josslyn" managed to hit. I don't see myself listening to this one all that much because there's nothing to grasp onto in the lyrics. I love an angry break up song, but this one is too general to make me feel attached.

I love the video. It's so much fun, and I love all the throwbacks she managed to pack into it along with how colorful it is, but I'm disappointed in the song itself. On tour back in March, she played a few unreleased songs from what was supposed to be on the upcoming EP, and from what I remember from that night, I liked those songs a whole lot more. Hopefully, this is just a fun interlude on the way back to harder hitting lyrics mixed with her signature dance pop sound. It feels like "Now" could've been great in a different world, in a different mood, in a not pandemic where we could all get together to dance. This will be a ton of fun at a concert, but given that we're all stuck consuming music alone, I need a bit more to grasp onto.

I'll leave the music video linked down below as well as the article I wrote about meeting Olivia and watching her show in Houston on her last tour, days before the rest of it got cancelled. It was an epic night, and I'm glad I got to have that memory.

Getting into Fletcher's EP S(ex) Tapes

Halsey's Acting Debut and the Book They Inspired It