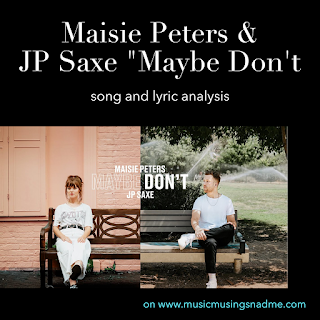 To continue going through all the new music from this Friday, Maisie Peters dropped a new single collaborating with JP Saxe, who's a rising star in the industry. You might recognize his name from his apocalyptic Julia Michaels collaboration, "If the World Was Ending" that's gotten significant radio play. I'm a huge fan of Maisie's, and today, to celebrate, I put out a reaction video to her EP from last summer, It's Your Bed, Babe, It's Your Funeral (watch it here). I was excited to see new music from her.

The song is like a cute rom-com in a song about the hesitancy of jumping into a new relationship. I like how the duet was divided sonically because they sing the intro and chorus in unison. Their voices are mixed well and have a nice balance of the best parts of both of their unique tones. I like that they did most of the song together instead of dividing it so starkly. They both have a real warmth in their voices which adds to the warm-fuzzy feel of the song overall.

It starts with them both singing, "I should hang up the phone, you said, 'Maybe don't'/And I think I should let go and you said, 'Maybe don't'/Cause I run from the things that I want the most/You said, 'I get that's what you do but'". It's such a fun beat under this and a cute back and forth. I love that the central line is "maybe don't" because there's such a playfulness in the line. It's such a cute way to address the fear that comes with a new relationship. They play the trope in a fresh way.

Maisie's verse frames out her fears as someone who's starting to fall in love. She's recoiling from what she wants because she's afraid of rejection. "We should never speak again/Because I like you, and lately it's been only getting worse". This is such a funny way to start the song, but I don't think it's an unfamiliar impulse. "So we should never speak again, because I want to/I've run through every outcome and in every one I'm hurt/Oh, I hate surprises, but you surprise me". She admits that her hesitation to jump in is based on her fear of getting hurt, probably because of what's happened in the past. I get that feeling of not wanting to even start something because it feels a bit doomed. I also love the cute line about getting surprised by this guy even making her want to jump into something.

In the chorus, they expand on the intro bit. The second half that we haven't heard before adds to the story. They can't promise certainty in the relationship, even as they suggest they should try it out. "I'm not saying I'm wrong, but you're maybe right/I don't know how to fall asleep unless you say goodnight". These two lines are so cute. There's no promises, but there's a breeziness to it that's not usually present. I also love the goodnight line because it's funny how when you're falling for someone, you develop these habits that you realize you can't do without. It's such a cute detail that you don't really realize in the moment.

Then, JP gets a shorter verse. "I'm hoping I could get a word with your expectations/Cause they don't seem to be based on you and me". These lines are so fascinating because he's realizing that he's getting stacked up against every bad break-up she's ever had. He's not getting to play in his own game, and I like how he deconstructs that. He continues, "You been making group decisions about us without us/Tell me what I'm gonna say and let me edit/I think it could be different if you let it". I like the group decisions line because she's dictating how the relationship will or won't happen without accounting for his feelings. He's offering her a chance to try for a different relationship path because he knows what she's been through and is conscious of that.

In the bridge, we get deeper into Maisie's fears. "This is just a heads up/I mess people's heads up" she laments. Maisie has the best word flips in her songs. I mention this a lot in her prior songs in a new video. She continues, "Only cause I'm scared of losing mine". Her fear is very vulnerable here even though her voice is still light and airy. They finish each other's lines and pieces through this bridge section. "If you could be less honest/Tick a couple less boxes/I could sabotage this and still be justified". This last admission is the most honest piece. She's realizing that he's too perfect to deny, or that if she sabotages the whole thing, she'll regret it forever.

The credits for this one is murky because Apple Music and Genius are disagreeing. Apple Music credits this to Maisie only. Genius credits Joe Rubel, JP Saxe, and Maisie, which feels more realistic because I believe I've heard Maisie mention having. writing session with JP and he writes most of his own stuff. That would make more sense to me.

Overall, this song is super cute. It's a rom-com in a song. I like the bouncy, bubbly melody, and I'm happy to see Maisie putting out even more music. I want everyone to love Maisie as much as I do, so please watch my latest reaction and my Top 10 Quarantine Music Video video from YouTube, and if you want to, I have a playlist inspired by Maisie's sound that goes on for like two hours if that sounds fun: Playlist. And, if you want to chat with me about the new music, find me on the Internet @mslaurenbrice.

Reacting to It's Your Bed Babe, It's Your Funeral EP

Diving into "Forget me too" MGK + Halsey

"god save me, but don't drown me out" Yungblud Video Discussion

Ranking Music Videos Made in Quarantine

Fletcher's Most Beautiful Video Yet: Sex with My Ex