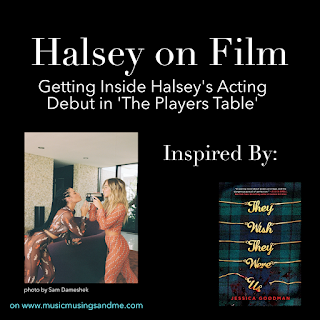 Yesterday, I had a weird collision of worlds moment where I was hearing the same news from both my YA Twitter community (if you don't know, I also blog about YA books over at Reading, Writing, and Me) and all the music news/Halsey update accounts that I follow. Halsey is making her acting debut in the TV series 'The Player's Table' based on the YA book by Jessica Goodman, They Wish They Were Us. Announcing it on Instagram, Halsey wrote, "I am the luckiest girl in the world because I get to make my acting debut with my favorite human-being Sydney Sweeney, on a tv adaption of the amazing book by Jessica Goodman, to be written/adapted + directed by one of the greatest Annabelle Attanasio and wildest of all I will also be a PRODUCER on the series with some of my idols JEAN-MARC VALLEE + NATHAN ROSS Crazy Rose Films with Sydney's Fifty-Fifty Films! You guys are gonna fall in love with the player's table. I simply cannot wait."
View this post on Instagram

I am the luckiest girl in the world because I get to make my acting debut with my favorite human-being @sydney_sweeney , on a tv adaptation of an amazing book by @jessicagoodman , to be written/adapted + directed by one of the greatest @annabelleattanasio and wildest of all I will also be a PRODUCER on the series with some of my idols JEAN-MARC VALLÉE + NATHAN ROSS @crazyrosefilms with Sydney’s Fifty-Fifty Films @fiftyfiftyfilms ! You guys are gonna fall in love with The Players Table. I simply cannot wait.... photos by @samdameshek

Her post tells you almost everything you need to know about her upcoming project. There's still no word when it will come out, but the project is said to be in development. I guess her epic Badlands road trip (read all about that here) ended in New York not for anything music related but to start on this new project. Halsey has worked with Sydney before as she was featured in the music video for "Graveyard". I was so excited to see Sydney attached to the project as well because I really enjoyed her in Euphoria. That show had such a great cast, and I look forward to seeing them in roles that have a bit more dimension. It's also incredibly cool that the project is being produced, in part, through Sydney's own studio.

To give a bit of context for the book and a possible insight into the story, it released from Penguin's Teen division back on August 4th. I recognized it immediately from promotional posts, even though I haven't read it or seen any of my friends review it yet. The story seems to fit perfectly into the boarding school thriller genre that YA does so well. While I don't read them a ton, they're always fun to settle into every once and a while. Reading the synopsis immediately reminded me of People Like Us, which I read last year and also of my latest thriller read, I Killed Zoe Spanos.

The official synopsis from Penguin reads, "Gossip Girl meets One of Us Is Lying with a dash of The Secret History in this slick, taut murder mystery set against the backdrop of an exclusive prep school on Long Island.

In Gold Coast, Long Island, everything from the expensive downtown shops to the manicured beaches, to the pressed uniforms of Jill Newman and her friends, looks perfect. But as Jill found out three years ago, nothing is as it seems.

Freshman year Jill’s best friend, the brilliant, dazzling Shaila Arnold, was killed by her boyfriend. After that dark night on the beach, Graham confessed, the case was closed, and Jill tried to move on.

Now, it’s Jill’s senior year and she’s determined to make it her best yet. After all, she’s a senior and a Player–a member of Gold Coast Prep’s exclusive, not-so-secret secret society. Senior Players have the best parties, highest grades and the admiration of the entire school. This is going to be Jill’s year. She’s sure of it.

But when Jill starts getting texts proclaiming Graham’s innocence, her dreams of the perfect senior year start to crumble. If Graham didn’t kill Shaila, who did? Jill vows to find out, but digging deeper could mean putting her friendships, and her future, in jeopardy."

I love the cozy, Long Island town setting, and this will be the perfect fall/Halloween read. Secret societies and a false confession seems to set up and exciting map of twists and turns. I already have my request in with the library. To dig in a bit more, Jill will be played by Sweeney while Halsey will play Rachel Calloway, Graham's older sister who left town but is coming back to try to save her brother and prove him innocent. She graduated from the school three years earlier and was seen as a legendary member of their society. I'm so happy that Halsey is playing an older character. YA shows are infamous for casting people Halsey's age to play 16, but it seems like all of these characters are 17/18+ which makes me feel a bit better about the casting.

On Jessica's Twitter, she gave a peak behind the creation of both characters. "@halsey will play Rachel, a character that challenged me as a writer, and forced Jill (@Sydney_sweeney) to think beyond herself. Together they're a force. I can't wait to see these incredible women bring these characters to life."

@halsey will play Rachel, a character that challenged me as a writer, and forces Jill (@sydney_sweeney) to think beyond herself. Together, they're a force. I can't wait to see these incredible women bring these characters to life. In the meantime... https://t.co/7Pc1XT3wXq

I'm so excited to both read the book and watch the show. I'm a huge fan of YA adaptions coming in the form of TV shows because I feel like it gives the space for so much more nuance and development. I particularly loved how Hulu executed their Looking For Alaska limited series. It seems like this adaptation is being done with the same level of care and attention. It's been too long since we had a quality creepy boarding school show. I'm hoping for maybe Riverdale vibes but more cohesive and thoughtful than that show ended up being. They certainly have the talent to back up an amazing show.

Also, can we talk about how Halsey can do everything? And how she's giving us all the quarantine content! I have complete faith that Halsey will blow us all away in her new role. She's one of the most emotional, expressive singers out there, and I'm sure she'll be able to bring that to the character. I'm amazed at how many worlds Halsey has been stepping into lately. Even with the Manic tour disrupted and the music industry's path forward uncertain, Halsey has managed to stay busy and keep creating in new and fascinating ways. So far, in this period, she's given us the Webster Hall Badlands Live album (review here) and whole experience around that (read about it here), a poetry book coming in November (more here), and now is trying out acting. She's shown there's plenty to do without displacing the current album cycle. Which upcoming Halsey project are you most excited for? Let me know in the comments.

If you want to get in on the reading fun before the book comes out, there are tons of book clubs run by Halsey fans popping up. The one I joined is run by my favorite update account, @halseyupdates. I'll leave the information down below or click here, but I think it'll be so fun to read along and then watch the show with other Halsey fans! I'm always excited for things that bring all of us as fans together as a community.

In the interest of being able to include as many people as possible, we've decided to move the book club to Discord! DMs limit you to 50 people, so instead of having a bunch of separate chats we can all consolidate in this one. Join Here! ->https://t.co/y2mbP8k1qk pic.twitter.com/6qNC6rodJh

— Halsey Updates (@HalseyUpdates) September 10, 2020
That's all for today! I hope everyone is just as excited about this as I am. It's another good reminder that Halsey always has a surprise up her sleeve! If you want to go ahead and buy They Wish They Were Us, please consider using my Bookshop affiliate link here. It supports the blog and indie bookstores!
More On Halsey...
All Posts
Badlands Webster Hall Album Review
Is Halsey Going Back to the Badlands?
Ending The Stigma: Halsey on Bipolar Disorder
YouTube
Subscribe!
Watch My Badlands Reaction!
More On YA Book Adaptions Click Here
More on Music, Musings, and Me:
Billboard Chart Rules Are Changing
"The One" Fletcher Song Review
What They'll Say About Us Finneas Song Review
Halsey Music News