Fletcher's "The One" Song and Music Video Review 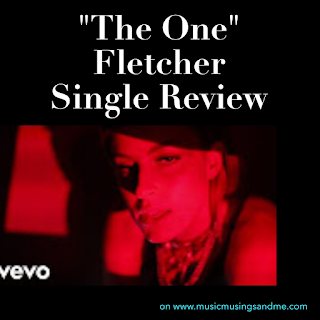 Yesterday afternoon, Fletcher surprised everyone by announcing we were getting another song off S(ex) Tapes before its release on the 18th. In the message, she promised this would be the last video and song we would get before the album release. That leaves us with three songs that we have now, three songs that will be brand new on release day, and it seems like a new version of "Bitter" which is a song Fletcher released earlier in the summer. You can read more about that here.

Getting into the song itself, it was written by Fletcher, Noonie Bao, and Malay (and produced by Malay), and it's the 4th track on the album. It's one of the most upbeat songs that we've gotten so far, and a new progression of sound for Fletcher. I'd added it to my playlist last night, and when it came on this morning, I completely didn't recognize it as a Fletcher song at all. Her voice sounds a bit lighter and floatier than usual, and the backing track has almost like distorted horn sounds in the mix before dropping it a more classic EDM type backing with hard hits out sound and a lot of playing with negative space. It almost sounds like it belongs on Selena Gomez's recent album, Rare.

Lyrically, this also feels a bit different for Fletcher. While it still has Fletcher's trademark honesty and openness with sexuality, it doesn't have quite as much lyrical content as most of her other songs, which was kind of a bummer. It's clear that this is meant to be a club song and an elated break in the middle of the album. Having this puzzle piece, though, does give an interesting look into how the story might progress through the album. We don't have track 1, but I would assume "Silence" might be the immediate aftermath of the break up, like the silence that follows it. Track 2 is "If I Hated You" which is already out (I wrote about it here), is about the pain of a break up that didn't end on bad terms. She doesn't know how to move on from the relationship because it wasn't bad in the first place. Then, "Bitter", which we at least know the lyrics to, is about being jealous of this person's new girlfriend and laughing because she knows just how wrong their relationship is about to go. That's where "The One" fits in. It seems like "Bitter" either dulled or liberating her feelings into allowing her to go back out and party. "The One" is all about hooking up with someone even though you have no intention of staying with them long term. It celebrates the freedom of being able to connect with someone without the fear of future baggage. To finish out the track list, there's mystery song "Shh... Don't Say It" and then "Feel" which is ballad of the album. It's the regretful reflection on all the things you miss about the person you love. It ends with "Sex (With My Ex)" which seems like the album comes back full circle for a reconciliation? Regardless, the album seems to tell a very nuanced, interesting story reflecting on the a relationship that might not quite be over- or at least you're not over it.

To get into "The One" a little bit, the lyrics made me immediately think about "Forever" which came out in the early summer. In "Forever" she talks about being in a relationship that she cherishes but breaks it off because her partner wants to get too serious too fast. She laments, "I want to be young and party/be dumb and never feel sorry/become a freak with my body". She seems to be living out that desire here as she talks to a new love interest about getting together but promising that there'll be no strings attached. Similar to the "Forever" lyric, she sings in the pre-chorus, "I just wanna bite your lips, do some freaky shit". I like how the songs tie back to each other, even if "Forever" isn't technically part of this album universe. It's purely physical, and the song doesn't seem to give a judgement on whether it helps or not. "The One" sort of symbolizes a breaking point on the album where she decides that she's done wallowing about the past relationship.

Then, on to the video, it's very in-line with Fletcher's typical music videos. There are a lot of outfits similar to "Forever" and "All Love". It's also another COVID video so it only features Fletcher in a giant wearhouse. My favorite part of the video is a preamble that leads into it. I almost wish she'd included it on the album version. In it, she says, "I just don't know what the future holds. I wish I just had a fucking crystal ball that would tell us what we're supposed to do and how we're supposed to do it. But life obviously doesn't work that way because things happen and other people happen. And this is just how I feel sometimes when I'm not with you. Like there's another side." Her voice sounds so honest and vulnerable. I feel like it sums up the album well. I love her make up in the video. It's pretty light, but there's some well placed glitter that is really fun and makes her sparkle a bit. As the song starts to break down to a beat more, the shots are cut with the music really expertly. All her movements fit with the track so well for them all being cut from different scenes. I also like when the music momentarily pauses, the screen flashes back. There were a lot of great choices made in an overall simple video. Credits for the video go to Shannon Beveridge (cinematographer and director), Tess Bjiere (creative director), Angelica Milash (editor). Fletcher also produced it.

Overall, I like the song and the video even though they're not my favorite release from Fletcher. She always manages to put impressive pieces of art. Like I said at the top, we get to listen to all of The S(ex) Tapes on the 18th! If you want more on Fletcher, check out the link down below because she might be the artist I've covered the most on my blog.

"If I Hated You" Single Review

Finneas "What They'll Say About Us" Song Review

"House With No Mirrors" Song Review