Diving Into "forget me too (feat. Halsey)" and Tickets To My Downfall 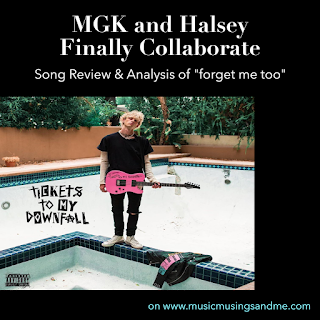 Last night was packed with new music releases. One of the most notable full length projects that dropped was Machine Gun Kelly's Tickets to my Downfall, which is one of the coolest album titles I've heard in a while. I haven't followed Machine Gun Kelly much, mostly because I really don't love his stage name and made a lot of assumptions based on it, but I've liked everything I've heard from him going back to that Camila Cabello song forever ago. The more I followed people who were friends with him like Halsey and Yungblud and heard him on random podcasts I listen to, the more invested I got. I realized maybe I'd judged a bit fast. So, since Halsey had a feature track on his album, I figured this was the perfect time to give his music shot.

This album is also a departure for MGK's usual genres as he jumps into pop punk inspired by the early 2000s which got me even more hooked. My early music taste was shaped by a couple different genres, but pop punk was one of the dominate ones. MGK goes a bit more punk than a lot of those songs leaned, but I'm still really a fan.

Getting into the actual Halsey collab, it's one of my favorite songs on the album (not only because Halsey is on it). It's track 5 and called "forget me too". It was written by Ashley Frangipane, Colson Baker, Nick Long, Omer Fedi, and Travis Barker (the last two also produced the song). Travis, who was featured on Halsey and Yungblud's collab "11 Minutes", executive produced the entire album. From a Halsey fandom perspective, I think everyone was excited for more punksey after "Experiment on Me" and "Nightmare". I also think "3 AM" is a good lead in too because it sounds like a new version of an Avril Lavigne song.

The track starts with a bit of an interlude of a few guitar strums and some talking to set up the session before the start of the actual song crashes in. MGK's voice hits in raw and through some kind of filter or old mic that makes it sound fuzzy and different. After a few lines, a wall of noise explodes with drums going a mile a minute. It's an intense wave, and his voice rushes to keep up with the chaos. But it's good chaos. Halsey also sounds different on this track. Clearly, she's still Halsey, but she's using her voice in a new color where she really does sound a lot like Avril. Her tone is a lot lighter and thinner than usual, but it carries the same emotional resonance. I like that they both have their own sections of verse and chorus, but in the bridge, they talk to each other, trading lines back and forth before taking the final chorus together. Sonically, I'm super hooked. While the first time the drums came crashing in at sonic speed took me a bit off guard, I like it. The dynamics are well controlled, and it brings a frantic energy that compliments the lyrics. It's well constructed.

Lyrically, there's an interesting story of an on and off relationship. MGK's verse sets us in the scene where he's at a party and his ex just walked in. "Damn/I saw you walk in the room and /I tried my best/Not to panic while I'm lookin' for the back door/I smell the perfume and it's obvious". I like how this sets the scene and adds a layer of understanding where they've started. In the rest of the verse, he decides to stay after all because he can't forget her. The end of the verse finds them hooking up again, and I like how the lyrics turned out. "And then a couple hours later/we're in room 29 at The Chateau".

Launching into MGK's prechorus, he perpetuates this weird state of their relationship adding, "I left before you woke up/ I don't feel right (See you sober)". So he wants to keep the relationship in a weird will they won't they state. I really like the chorus lyrics too. There's a level of sarcasm in it and knowingness that it'll probably never be actually over. "You want me to forget you/Okay, forget me too/You tell me you hate me, baby/Yeah I bet you do". If they were off-again, maybe they could both walk away, but he knows that won't be true.

Then, Halsey responds in the next verse. I think I read somewhere that MGK said that Halsey wrote her own verse and did it in less than five minutes. She counters his flippant view of the relationship with how much being the one waiting for the phone is hurting her and her confusion between what she wants and what's actually best for her. "I've wasted so much time/Waitn' around for your phone calls every night/My bad dreams are silk screens/Cause I taste blood when you bleed". It's a lot easier to be the one blowing off the relationship than the one waiting by the phone for it to be real. She picks a really fascinating way to emphasize their connection with the blood line. In the second half, she talks about how much it's affecting her emotional state. "It's eating me alive/We'd both be better off alone/Still think I'd get you on the phone/With one last breath in me/I'd die before I leave you". She echoes his sentiment about how they both know it needs to be over, but they won't let it happen.

Her version of the prechorus is the flip side of being left. It also doubles down on her idea that she's the one craving a more serious relationship and for him to take his life more seriously. She sings, "You left before I woke up/Why don't I ever see you sober?" She sings the same chorus that he did earlier, this time with a new weight in it.

The bridge is probably my favorite part because they're talking to each other instead of about each other. MGK starts it off with, "Hey you/Tell me why you do things/that make me" and Halsey finishes his sentence with one of the prettiest lines in the song, "Hate you/It's an emotional kaleidoscope/when I" then he finishes, "Face you/Permanent calligraphy, I just". Then they come together to realize just how linked they are, "Tattooed/Your name on me forever". The bridge does such a good point of driving home the point of just how connected they are, expanding on Halsey's earlier idea of "I taste blood when you bleed". And you realize why there can't be a resolution because they're not in the same place, but they're also not in a position to let go. They take the last chorus together and their voice lock together perfectly.

I'm a huge fan of the song. They articulate this super complicated relationship and make the listener feel just as torn as they do about the right answer. I love that these friends finally got to collab. That always ends up making the best music. It's also cool to see Travis Barker continuing to work with that group. Travis was also on MGK and Yungblud's recent collab (that I like a lot) called "I think I'm OKAY".

"You tell me you hate me, baby/Yeah, I bet you do"

"It's an emotional kaleidoscope when I/Face you/Permanent calligraphy, I just tattoo'd/Your name on me forever, fuck"

I enjoyed the entire project overall as well. I liked this song so much that I decided to loop through to listen to the entire album. I might make a reaction to this video at some point, but "title track", "bloody valentine", "forget me too", "all I know", "lonely", and "play this when I'm gone" are my favorites. The last one even made me cry, which I was not anticipating last night.

If you want to chat about the song or the album with me, find me online @mslaurenbrice or leave a comment. Let me know if you want to see a reaction to Tickets to My Downfall on my YouTube channel (visit and subscribe to my channel here).

Yungblud "god save me, but don't drown me out" music video

Fletcher's Most Beautiful Music Video: Sex With My Ex