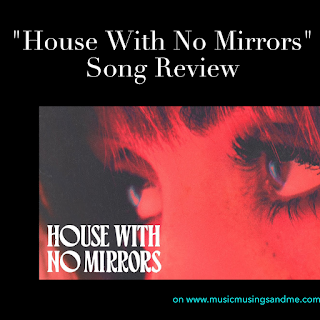 This morning, Sasha Sloan released another new song off of her debut album, Only Child. This is the second song she's released since announcing the album, though a track list and a release date are still not out. If you missed my review of "Lie", the lead single, you can find that here. It was a much poppier sound than I'm used to with Sasha, and I was curious to see what else the album would have in store. She occupies a genre space somewhere between indie pop and singer songwriter type sounds (Apple calls it Alternative), and this album is looking like it'll show the entirety of that range.
On "House With No Mirrors", we get a much more signature Sasha song. It has every element I love about her music baked into it. "House" is a super personal song about struggling with liking yourself and dealing with eating disorders. It's almost a wishful song about what she could be like if she could get out of her head and find that inner self-love. My favorite part of Sasha's music is her vulnerability and the fact that she covers subjects that don't often get covered in mainstream music. She sings about her family problems, peer pressure, lack of self confidence, and struggling with mental health. In this song, her words continue to be compulsively relatable and extremely important.
On a musical note, the song is a pretty simple guitar ballad. You can hear the strings getting plucked, but the layering of the background vocals give the track a warm glow that makes it feel fuller than just the guitar. I like the percussive elements that are introduced through the guitar later in the song as well. The one thing that I can't get out of my head, though, is that both the vocal melody and the guitar part sound so much like a super stripped version of One Direction's "Ready to Run". I can't put my finger on why, but it's particularly striking in the first verse and the chorus. Maybe I'm the only one, but I had to sit with it for a while to put my finger on what was creating the weird itchy feeling in my brain. Of course, a lot of songs vaguely sound like one another because, as limitless as music feels, there are only so many chords and patterns and choices. I'm not criticizing this at all; it's just interesting that my brain went to that random connection. Let me know in the comments if I'm the only one who hears that.
Going into the lyrics, they're so honest and impactful. I think a lot of people can relate to so many feelings she puts out on full display. I love how the whole central idea is "If I lived in a house with no mirrors/Where the walls didn't talk back at me/Maybe I'd dream a bit bigger". It's such a fascinating way to frame it. If you had no device to use to torture yourself about how you look, maybe you wouldn't go looking for those pieces that you hate. Also, I love that idea that if those negative thoughts about your flaws weren't presented to you in the first place, or thrown in your face so often, you wouldn't think of yourself as less than or unworthy. I relate deeply to that part of the chorus and all the activities she wonders if she would do if she wasn't so buried in her perceived imperfections during the verses. I've stopped myself from going out because I felt like I didn't have an outfit or nothing fit right that day. I've told myself there are certain things I can't do until I'm physically this or that. It's so wrong and limiting. I fight every single day to break that pattern in myself, and it's comforting to hear someone put it into words as a reminder that I'm not alone.
"Lie" and "House With No Mirrors" are excellent single choices as far as I'm concerned. I'm excited about the range that's being showcased for the album, and I love getting to see so many different musical sides to Sasha. I'm hoping a date for Only Child will come out soon so I can put it on my calendar to look forward to.

Favorite Lyrics:
"I'd be cooler, I'd be smarter/Probably be a better daughter"
"I'd jump in the pool without thinking twice"
"I would say when I was hungry"
"I'd throw on some jeans, not know the size/Walk out the door and not want to cry"
"If I lived in house with no mirrors/Where the walls didn't pick me apart"
"I'd be louder, I'd be honest/Probably I wouldn't be self-conscious"
"And I wouldn't pull away from his touch /If he said I was pretty I'd think that I was"
"Yeah, I wonder what I'd be like"