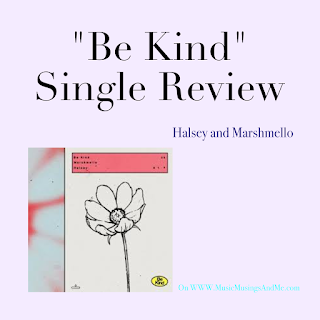 Yes, I know we are two days into May, but I don't care. I don't need to hear any more songs. I have found my song of the summer. It is the Halsey/Marshmello collab that came out Friday (5/1). I was super sick the night it came out, but listening to "Be Kind" made me instantly feel better. It's dreamy, the lyrics cut straight to the point and say something that feels new. It hits the perfect notes between light spring/summer vibes and popstar moments. The mix of the drum fills, keys, and synths hit perfectly.
Every time the chorus hits, an image of a field of pretty flowers and a sunny day flashes through my head. Almost like a laundry commercial. But not boring and kinda weird.
Anyway, I wasn't sure what to expect when Halsey hinted at the new track with the cutest little hand-drawn flower GIF. Her music, while generally is alternative/pop type stuff, Halsey makes it a point to play with every genre at all times. For instance Manic goes from electro-pop to country to Avril Lavigne pop-punk to singer songwriter type stuff. And then there's her two latest stand alone singles "Nightmare" and "Experiment on Me" that include a bit of screaming and a ton of crashing and a lot of being a badass. (Also, while I thought "Be Kind" came out of nowhere, when I was reading up on "Experiment on Me" on NME, I saw a quote where she hinted at a second collaboration. Check it out here and let me know what your take is).
I love every version of Halsey. She's extremely versatile in both sound and with hair colors. But this song hits the perfect note for right now with summer coming on and everyone needing a serious mood boost. Also, the more I listen the more I can definitely see how it's a Marshmello production.
To detour a bit, let's talk about Marshmello. I don't honestly know that much about him. I've heard a ton of his songs on the radio, and I have always vibed with the production. He's worked with a ton of artists I've liked, so I don't know why I haven't been paying more attention. (Though I still have a huge problem with "Wolves" claiming that wolves live in the jungle, though that probably wasn't hiss fault). I was actually a huge fan of his song "Here With Me" with CHVRCHES, and it has a very similar overall sound to "Be Kind".
A lot of Marshmello's songs do have that signature DJ feel to them between super electronic sounds or major drops and breakdowns. What I really like about this song is that it feels like it happens on a smaller scale and lives outside the club. The track dips in and out with specific sections instead of having a major moment where the bridge would be. It's a super dynamic track that has a pulse but also is on the rollercoaster of her emotions. I particularly like the choice after the chorus to cut out to a second of silence to regroup from the explosive chorus and bring us back to a version of square one to build off of again.
I also love how Halsey's voice is used on the track. She has such a versatile voice that's great at portraying emotion. It runs the full spectrum here. There's a soft and vulnerable side and then an explosive, powerful element in the chorus. She manipulates it well to fit the exact emotion of the lyric so that even though the song is bright and sunny and pulsing the whole time, you get the sense to pay enough attention to the lyrics to realize that not everything is sunshine and rainbows.
"Be Kind" manages to ride the perfect line with the upbeat sad song thing, but it's a hopeful kind of sad. I also think that it's a great message in general. On an Instagram live recently, Halsey said she'd gotten a ton of messages from people relating to the person she's singing to. I think that's really cool, and it makes sense. Even though she's pointing out the negative side of someone's behavior, it's done in a really accessible, non-accusatory way. I don't feel like that approach is used super often. It manages to be a serious and totally feel good at the same time. Which is just what I want out of a song.
I've rambled about my new favorite song long enough, so I'm going to wrap this up with my favorite lyrics. Reading them again, it almost gives me a positive, optimistic side of "Without Me" vibe.
Okay. I'm going to cheat and use giant chunks of this song because it's all so great.
Verse 1:
"Wanna believe, wanna believeThat you don't have a bad bone in your bodyBut the bruises on your ego make you go wild, wild, wild, yeahWanna believe, wanna believeThat even when you're stone cold, you're sorryTell me why you gotta be so outta your mind, yeah"

I was going to pick one half or the other of this verse, but I couldn't decide. I love the contrast of bad bones and bruised egos. I also think it's a really true sentiment that egos make us do things that aren't in character (or in our bones). They can exist at the same time.

This one hits hard, and I think taps into a truth that isn't acknowledged super often. There are just some people who are going to choose to lie and hide things for no reason. She talks about how she's made it clear that she's a safe space for her partner to just be themselves and share their burdens, but they choose to lie and cause problems instead. It's really sad but also true to life. And I think she sums up the confusion of being on the other side and thinking you've done everything you can to make someone comfortable with opening up.
I just love that the overall message, regardless of the particular circumstances, is that it's okay to pick love and be in love and accept it honestly. I think we all need reminded of that from time to time.
What do you think of this epic summer song? Have you had "Be Kind" on repeat since it came out? Leave your first impressions in the comments and let me know.