What's In My Earbuds 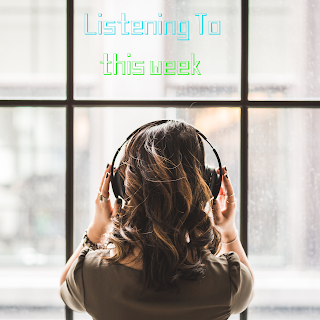 I've decided to start a new series on here to share what I'm listening to at the moment more consistently and have memories of what I was listening to a different times in my life. I'm calling it What's In My Earbuds because these are the playlists that I put on when I just want music in the background or to fall asleep to. They're my info dump playlists in a way. They have the same backbone artists with different songs, and they're where I put the new stuff I find and love. A lot of people have super cute playlists with themes and names. Mine aren't like that. I have a million created and abandoned ones that range in titles from my writing projects to stupid names like Another One so that it would show up at the top of my library. I have a couple old set lists I'll put on from time to time, and I do make cute playlists on here, but I wanted to give you guys an unfiltered, unedited look at what I'm listening to at the moment.
I'm organizing these in no particular order by artist because that feels like the clearest way to go about this. Like I said, there's no rhyme or reason to what's on here, they're just what feels right at the moment. I've added a couple links throughout the article to other posts I've written on the artists or podcast episodes I've done.

Harry Styles
There's always going to be a ton of Harry Styles on my playlist because it's like comfort music for me at this point. The trick for me is cycling the 22 or so songs around so that I don't get sick of them. I've been listening to Fine Line a ton as an album, so that's why it's mostly tracks from HS1. I try to pick tracks I haven't given enough love to lately or that match my general mood. Except for "From The Dining Table". That one will always make the cut.
"To Be So Lonely"
"Fine Line"
"Meet Me In the Hallway"
"Ever Since New York"
"Woman"
"From the Dining Table"

Olivia O'Brien
Like I said with Harry, I've been listening to her stuff nonstop lately, so that's why it's more limited on this one. I listen to her setlist from the show a ton. (If you want to read about how that went, check it out here)
"Trust Issues"
"Find What You're Looking For"
"Empty"

Taylor Swift
Taylor is another backbone for my playlists. Taylor feels like coming home. I've been trying to listen to Lover more lately because I just haven't listened to the album a ton, and I feel like I should get to know it better. I've also been super invested in rediscovering 1989 for the last month, and Reputation will always be my album.
"Dress"
"Afterglow"
"I Wish You Would"

Hey Violet
I discovered Hey Violet because they were one of thee openers for Olivia, and I really enjoyed their set. I've been cycling through some of the songs they've had up ever since.
"Clean" (Stripped)

Louis Tomlinson
For some reason, Louis is an artist that I've been coming back to a lot recently. I like Walls as an album, and I find it oddly calming. I think the BritPop sound reminds me of a lot of the bands my mom played when I was younger, and Louis's music reminds me of my mom. Maybe that's what's going on. Also, all of his music has a real undercurrent of hope to it even when it's sad, and I need all the hope I can get right now.
"Don't Let It Break Your Heart"
"Only The Brave"
"Habit"

Halsey
Halsey completes my trifecta of people who will always be on my playlist no matter what. Lately, I've been super into her EP from 2015, Room 93. I only really got into it after her European set list called my attention to it. I'm obsessed with "Is There Somewhere". It's just so unique in structure and so devoted to storytelling. It's one of my favorite songs of all time.
"Is There Somewhere"
"Trouble" (Stripped)
"Ghost"
"Don't Play"
"Hurricane"

Conan Gray
Conan has just released one of my favorite albums of late. Kid Krow speaks to thee park of me that loves Billie Eilish so much. The production is fascinating, it's unafraid to say exactly what it wants to, and the songs are crafted around story. I've been listening to the whole album a ton. I also discovered that Conan was a YouTuber for years, and I've been spending my ample amount of time watching his past videos. They're really great.
"Wish You Were Sober"
"(Online Love)"
"The Cut That Always Bleeds"
"Affluenza"
"Heather"
"Little League"

Anne-Marie
I don't listen to Anne-Marie a ton, but I wanted to put some more new artists in rotation. I'm trying out a couple songs I liked from her recent Global Citizen mini-concert. I also figured I had so many sad songs, I needed something happy.
"2002"
"Birthday" (Acoustic)
"Her"
"Ciao Adios"

Niall Horan
I've been watching a ton of Niall's Instagram lives and been listening to Heartbreak Weather a bit, so I figured I'd put some of his songs on the playlist. You'll see that a lot of these picks (Niall, Conan, Lauv, Anne-Marie) were inspired by the lives I've been watching to fill my time. Also, "Too Much to Ask" has been one of my favorite songs for years.
"Too Much To Ask"
"Bend The Rules"
"San Fransisco"

Lauv
How I'm Feeling is another album I've been really enjoying, and seeing them performed has made me extra excited about them. I've liked some of his music before, but this album really got me hooked.
"Drugs & The Internet"
"Sims"
"Canada"
"Changes"
"Sad Forever"
"Julia"
"Modern Loneliness"

Random Songs For Random Reasons
"homecoming queen?"- Kelsea Ballerini- I listened to a lot of Kelsea's new album because I heard she had a song with Halsey, and this song was the clear winner for me. I love the lyrics.
"Won't Go Home Without You"- Maroon 5- This song randomly came on the other day, and I almost burst into tears at "Every night you cry yourself to sleep/Thinking why does this happen to me?/Why does every moment have to be so hard?" Adam Levine couldn't;t have predicted the future, but I think this strikes a chord with a lot of us right now.
"Does He Know?"- One Direction- I always pick one One Direction song for every playlist, and I tend to choose the more absurd, goofy ones that make me laugh in a "are they really saying that?" way. I need songs that make me just feel as free as a little kid, especially now. (Past winners include "Rock Me" and "Temporary Fix")
"Selfish"- Madison Beer- I don't know a ton about Madison or her music, but I've been enjoying a couple of her new tracks. I really like the chorus here.

my playlist What's In my Earbuds