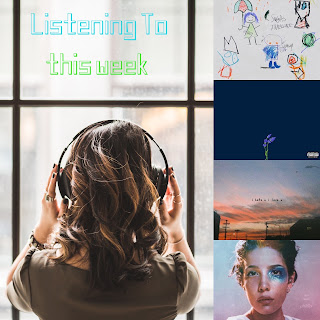 For this week's edition, I'm going to switch it up a little. For the last two weeks, I've highlighted four artists and what I love about them. This time, I'm picking two songs that are stuck in my head this week to discuss with you.

Okay, first up is Halsey. Not Halsey as an artist because I definitely want to talk about her more later because she's one of my favorite artists of all time, but Halsey who just put out a Kpop collaboration single with Suga last night at midnight. Halsey who knocked me off my feet and made me realize another new thing about myself. She put out two incredible songs last night, "SUGA's Interlude" and "Finally // beautiful stranger". While the later is special song in its own right and demonstrates Halsey playing with the country genre, the former caused a personal revelation. Like I said, I love Halsey, but I didn't think I'd like the song because I'm not into K-Pop. Mostly because I've never liked a song that's not been in English. I get it, not a great approach as a music listener, but lyrics are the most important part of a song for me, so I felt like if I couldn't understand those, what was I listening for. I've never been so happy to be wrong. While I admittedly think that it helped a lot to have Halsey singing the chorus in English to orient the song in a theme, as soon as I got over my feelings of panic at not knowing what he was saying, I realized, I didn't have to know exactly what the words were, or even what he was saying at all to get it. I actually really connected with it. I'm not going to go into the specifics of the song a ton since I already broke it down in this week's podcast episode, but I wanted to put it in this week's wrap up because it made me stop and think and question my flawed outlook. It was a very Western-centric view that I'd never thought to bother challenging, but, now that I think about it, I should've realized that there is a universal truth in music like everyone claims. I mean, Taylor Swift sells out massive stadiums around the globe. Not every one of those fans speak English as a first language or even at all, but we're all still standing there crying over her. Even though I don't see myself joining the BTS army anytime soon, I have a newfound appreciation for it, and I'll definitely be more open to music in other languages from now on. Thank you Halsey.

My second song pick is a throwback to almost four years ago to a song that I don't think will ever have enough attention. It might be the prime example of what I think a perfect song is. "I hate u, I love u" by gnash and Olivia O'Brien. If memory serves, Olivia wrote this song in one version as a solo song for herself and put it on YouTube where gnash found it and wanted to collaborate with it. The original part had a different verse in gnash's part, but I think the reframing of the song adds tons more depth to it. It's basically everything I love in a song though: a piano ballad, an intense story, and a duet. I think the writer/storyteller/reader jumps out in my reasons for viscerally loving a song. If you tell me a deep, painful, detailed, emotional story, I will love you forever with no questions asked. And, for some reason, I've always believed that a well executed duet just takes things to another stratosphere. I guess it adds in another narrative element to the song by allowing for dialogue and intensity to be built in the back and forth. The lyrics here are incredible and the voices and piano just feel like vessels to deliver the pain. It opens "Feeling used but I'm still missing you" it sets you on unsteady ground from the start. Olivia sings about knowing she'll never be loved like the other girls he admires or chases but is unable to let go of the love/crush/infatuation she has for him which creates the conflict "I hate you/I love you/I hate that I want you". Then his verse, which I see as possibly in conversation with hers but also possibly as a third party commiserating, he sings about a lost love who refused to commit. "You ever wonder what we could've been/You said you wouldn't and you fucking did/Lie to me/Lie with me, get your fucking fix/Now all my drinks and all my feelings are all fucking mixed." Earlier in the verse when he's reminiscing more, he brings out amazing sensory details "I miss you when I can't sleep/Or right after coffee/Or right when I can't eat/I miss you in my front seat/Still got sand in my sweater from nights we do remember." It all boils down to being a song about two people in deep emotional pain over a failed relationship and one that never happened. Also, it's a song that has an extraordinary amount of cussing, but it never feels forced or out of place. It feels genuine and part of the irrational stream of consciousness. It's a masterclass of cussing in song. I bring this one up this week because I love playing it on the piano and singing my own version. I've been playing it a lot, and every time I hear it come on in the shuffle, it makes me pause and sink into its world. It's a song everyone should hear for the first time or be reminded of again.
Artists of the week my playlist