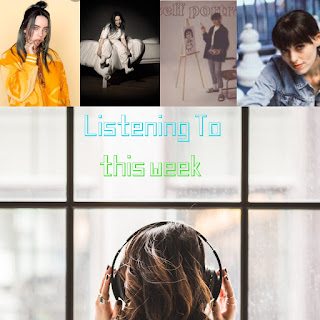 This week's top 2 artists happen to tie really nicely into last week's picks. I've talked about wanting to discuss Sasha Sloan's Self Portrait EP for like a month now, and I mentioned that last week. Then I sort of impulsively went with Billie Eilish as my second artist for the week. If you missed it, I talked about her brother co-writer, and producer, Finneas, last week. But this week has had Billie Eilish written all over it for me. On the plane ride I took on Saturday, I listened to "When We All Fall Asleep, Where Do We Go?" in full again because I was getting ready to talk about last Wednesday's Grammy nominations on the Empathy Factor podcast. Then I walked into a department store the next day, locked eyes with a pair of scary tall heeled boots with some serious laces and gold hooks all the way up and both fell in love and heard "you should see me in a crown" blaring from them. I love nothing more than a photo or object that I can hear as weird as it sounds. To top it off, Billie smashed the AMAs both as a performer and an audience member and did her third year of doing the same interview with Vanity Fair on YouTube which is always a highlight for me.
I've linked all the songs I talk about to their YouTube videos so you can easily listen to them.

(Weird side note: I was listening to these tracks off my playlist and Watermelon Sugar came on right after "Thoughts" and, sonically, they actually pair together extremely well and distracted me from writing this post. )


Artists of the week my playlist